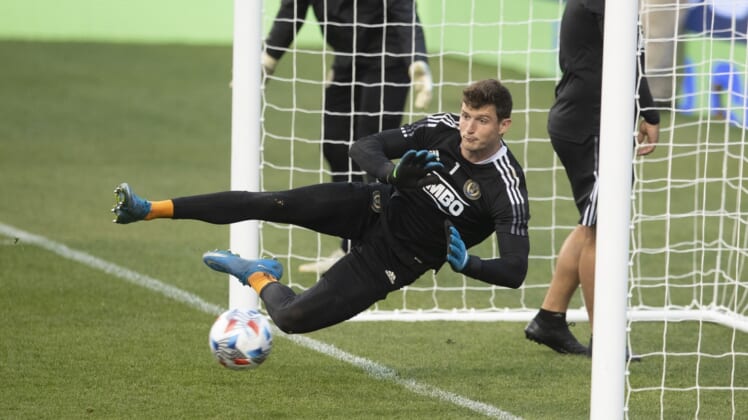 May 30, 2021; Chester, Pennsylvania, USA; Philadelphia Union goalkeeper Matt Freese (1) makes a save during warms up prior to the match against the Portland Timbers at Subaru Park. Mandatory Credit: Mitchell Leff-USA TODAY Sports

Kacper Przybylko had one goal and one assist to lift the host Philadelphia Union past the Portland Timbers 3-0 on Sunday.

Sergio Santos and Jack Elliott each added one goal for the Union, who extended their unbeaten streak to five straight. Kai Wagner and Cory Burke contributed assists for the Union (4-2-2, 14 points).

The Timbers (2-4-1, 9 points), who have been besieged with injuries, had their two-game winning streak snapped.

Goalkeeper Logan Ketterer (two saves) had posted shutouts in each of his previous two games. Ketterer is the fourth different goalkeeper used by the Timbers this season.

The Union nearly scored in the 12th minute when Wagner sent a low lining shot just wide from outside the top of the box.

The game became quite chippy as Portland’s Eryk Williamson appeared to be elbowed in the mouth by Jamiro Monteiro in the 22nd minute. 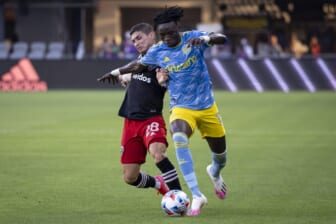 Przybylko scored in the 26th minute to give the Union a 1-0 advantage as he headed a cross into the box past Ketterer.

Philadelphia went ahead 2-0 in the 31st minute when Santos redirected a corner kick into the net. The ball initially deflected off Przybylko.

Portland generated very little offensive pressure in the first half and managed only one shot on goal.

In the 55th minute, the Timbers’ Felipe Mora appeared to have a solid scoring chance just inside the box. But Mora couldn’t quite control the cross and the ball was cleared.

One minute later, Mora had another opportunity but shot the ball over the net.

The Union took a commanding 3-0 advantage in the 63rd minute when Elliott scored his first goal of the season. The ball was loose off a rebound and Elliott capitalized.

Elliott nearly scored again in the 73rd minute when he redirected a cross off the post.

The Timbers began to elevate their offensive play and Diego Valeri looked to have a goal in the 78th minute. But with a wide open net, Valeri sent the shot just high.