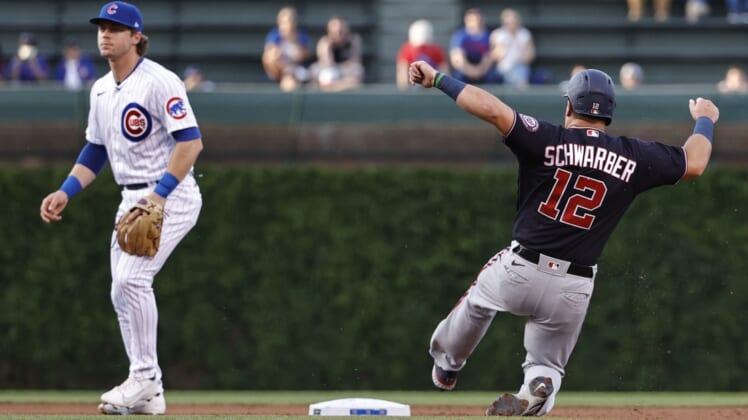 Scherzer (4-2) limited the Cubs to two runs on five hits with four walks and eight strikeouts. He improved to 3-0 with a 1.37 ERA in four starts this month.

Three Washington pitchers combined on four innings of one-run, three-hit relief, with Brad Hand working around Javier Baez’s solo home run in the ninth to earn his fifth save.

A second-inning RBI single from Nico Hoerner gave the Cubs a 1-0 lead. On the play, Nationals center fielder Victor Robles nabbed Eric Sogard with a strong throw to the plate, ending the inning.

Washington tied the game one inning later on an RBI single by Trea Turner, who finished 2-for-5. After stealing second and advancing to third on a single, Turner scored on a Jake Arrieta wild pitch to put the Nationals ahead 2-1.

Robles made it 3-1 Washington with an RBI single in the fourth. He suffered an apparent ankle injury on the play but remained in the game initially, and he finished with two hits. Robles exited in the seventh inning.

In the top of the fifth, the Nationals added another run as Soto drilled a solo home run off the right field scoreboard while falling to one knee. The ball traveled an estimated 421 feet.

Chicago responded with Ian Happ’s RBI single in the bottom of the fifth but could draw no closer with the bases loaded, as Willson Contreras struck out and David Bote flied to center.

Joc Pederson had two hits for the Cubs.

First baseman Anthony Rizzo was held out of the Chicago lineup to rest an ailing back.

The Cubs’ P.J. Higgins made his major league debut when he pinch-hit for Jason Heyward in the fourth inning, as Heyward was removed upon experiencing left hamstring tightness.

Nationals manager Dave Martinez was ejected in the seventh inning for arguing an interference call.