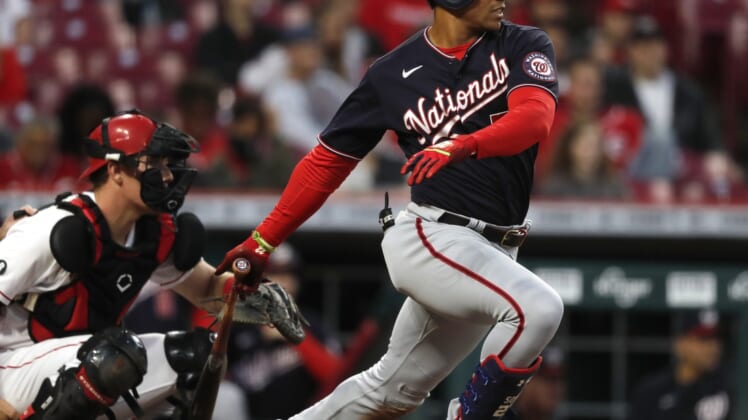 Soto, making a strong push for National League MVP, went 3-for-3 with two walks for a second straight game. The 22-year-old defending NL batting champion has reached base in 12 consecutive plate appearances — once on an error — over three games and has reached base in 25 of 26 games.

The Nationals won for the 11th time in their last 12 visits to Great American Ball Park.

Corbin (9-15) allowed four hits and struck out seven while walking four to record just his third win in his last 13 starts. Kyle Finnegan allowed an RBI triple to pinch hitter Max Schrock and a run-scoring groundout by Tucker Barnhart in the ninth but still earned his 11th save.

The free-falling Reds (78-75) lost for the fourth time in five games to fall 5 1/2 games behind the red-hot St. Louis Cardinals in the race for the second wild-card spot in the National League. The Reds, losers of 18 of 27, were playing their first game since signing manager David Bell to a two-year extension.

The Nationals (64-89) jumped out on top 1-0 in the third inning when Lane Thomas and Juan Soto singled off Reds starter and loser Luis Castillo (8-16). Josh Bell followed with a single to left to score Thomas.

Soto reached in his 10th straight plate appearance leading off the sixth against Castillo. Soto fell behind two strikes before fouling off two straight pitches. He then connected off a 98-mph sinker for a home run off the top of the wall on in left to put Washington ahead, 2-0.

Soto continued his torrid streak in the seventh against reliever Luis Cessa, a pitcher who had retired 27 consecutive batters dating to Sept. 1 against St. Louis. Soto ended Cessa’s streak with another opposite-field homer — his 29th — just inside the foul pole in left for a 3-0 Nationals lead.

As has often been the case of late, the Reds squandered great opportunities, including in the third, when Corbin loaded the bases on back-to-back four-pitch walks to Jonathan India and Tyler Stephenson. But Corbin bounced back with strikeouts of Nick Castellanos and Joey Votto to end the inning.

One game after going 1-for-12 with runners in scoring position, the Reds were 1-for-8 and left nine on base.