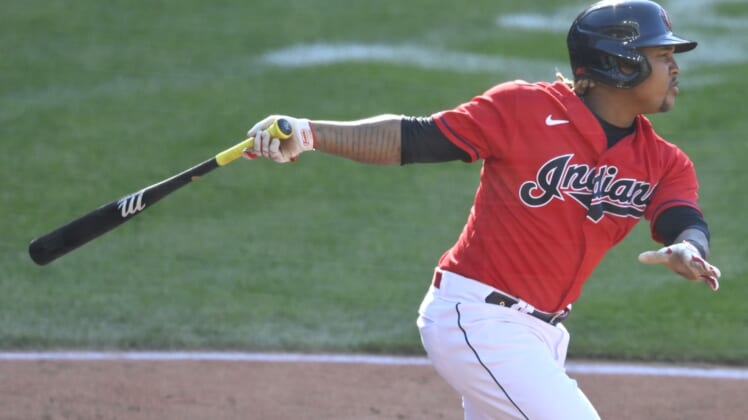 Jose Ramirez hit a walkoff sacrifice fly in a two-run bottom of the seventh inning and the Cleveland Indians defeated the visiting Toronto Blue Jays 6-5 to gain a split in a doubleheader on Sunday.

The Indians tied the game with four runs in the bottom of the sixth, but Toronto took a 5-4 lead on a single by Marcus Semien in the top of the seventh against Cleveland reliever Emmanuel Clase (3-2).

Tyler Chatwood (0-2) walked Yu Chang, pinch-hitter Bradley Zimmer, Cesar Hernandez and Amed Rosario in succession with one out in the bottom of the seventh to tie the game. Anthony Castro replaced Chatwood and allowed the sacrifice fly to right by Ramirez.

The Blue Jays won the first game of the doubleheader 4-1. By winning Game 2, the Indians averted being swept in the three-game series.

Both games were seven innings.

The Blue Jays scored four runs in the third after loading the bases with one out.

Semien walked and Bo Bichette singled. The runners advanced on a wild pitch and Vladimir Guerrero Jr. walked. Teoscar Hernandez cleared the bases with a double off the top of the wall in right center. Randal Grichuk hit an RBI double to left, and Hentges was replaced by Jean Carlos Mejia, who got the final two outs of the inning and stranded Grichuk.

Chang reached first base on an error by third baseman Santiago Espinal to lead off the bottom of the sixth. Rene Rivera hit an RBI double to right center, Hernandez followed with a single to left, and Rosario lined a single off the glove of Matz to score another run. With no one out, Chatwood replaced Matz and gave up an RBI single to Jose Ramirez hit an RBI single to center. The tying run scored when Harold Ramirez hit into a double play.

Clase allowed a leadoff walk to Jonathan Davis to lead off the Blue Jays’ seventh. Danny Jansen sacrificed Davis to second and Semien hit an RBI single to center. Bichette hit into a double play to end the inning.