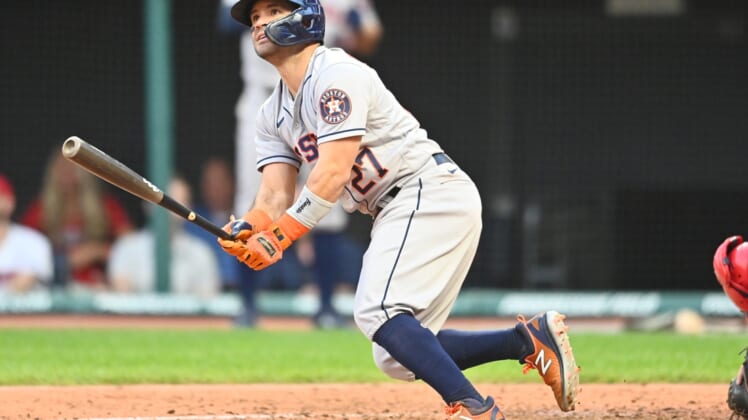 Jose Altuve belted his second grand slam of the season to propel the visiting Houston Astros to a 7-2 victory over the Cleveland Indians on Thursday.

Michael Brantley launched a solo homer among his three hits against his former team and Yordan Alvarez also went deep to help the Astros snap a four-game losing skid.

The offense proved more than enough for Framber Valdez (5-1), who worked around five walks to allow two runs on four hits while striking out six in seven innings.

Harold Ramirez had an RBI double and scored for the Indians, who have dropped three in a row and five of their last six.

Houston halved its early two-run deficit after Alvarez deposited a 2-1 sinker from rookie J.C. Mejia (1-3) over the wall in right-center field. The homer was Alvarez’s 14th of the season and fifth in his last 11 games.

The Astros quickly loaded the bases in the fifth inning before Altuve sent a 1-2 slider from Mejia over the wall in left field for his team-leading 18th homer of the season. It also marked his second grand slam of 2021, with his first coming in the 10th inning of Houston’s 6-3 win over the Texas Rangers on June 15.

The blast pushed Altuve’s career RBI total to 603, moving him into eighth place in franchise history.

Abraham Toro singled to chase Mejia and advanced to third on Brantley’s double before scoring on Yuli Gurriel’s sacrifice fly.

Brantley capped the scoring in the seventh inning by crushing a 1-1 sinker from Justin Garza over the wall down the right-field line. The homer was the fifth this season for Brantley, who played with Cleveland from 2009 to 2018.

Ramirez led off the second inning with a walk off Valdez and advanced to third base on Eddie Rosario’s single to left-center field. He then scored after Valdez uncorked a wild pitch.

The Indians doubled their advantage in the third inning after Jose Ramirez and Harold Ramirez recorded back-to-back doubles.

Rosario left the game in the third inning with right abdominal tightness.