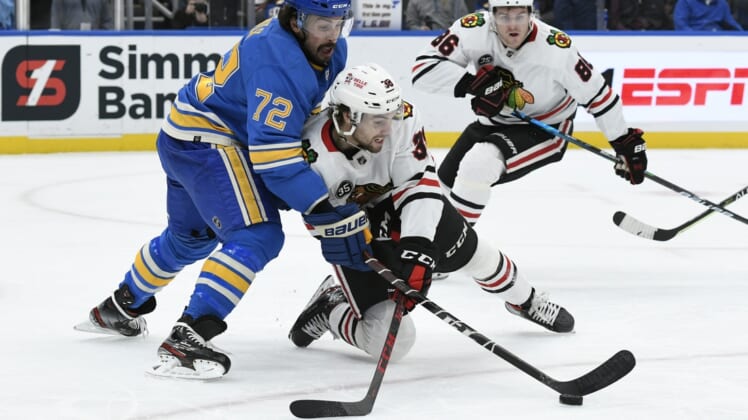 Jordan Binnington made 25 saves for his ninth career shutout — and his first since 2019-20 — as the St. Louis Blues blanked the visiting Chicago Blackhawks 1-0 Saturday night

Torey Krug scored a power-play goal for the Central Division-leading Blues, who have won six of seven games to open the season.

Marc-Andre Fleury made 36 saves for the reeling Blackhawks, who fell to 0-7-2.

Both teams were missing key players due to injuries and COVID-19 protocols. Patrick Kane headlined the Blackhawks absentees, while team captain Ryan O’Reilly topped the list of sidelined Blues.

The Blues outshot the Blackhawks 14-4 in the first period and controlled play for much of frame. Marco Scandella had a tremendous scoring chance on a back-door cut from the left point and Jordan Kyrou got a clean look on a 2-on-1 rush.

But Fleury stopped those shots and several other prime chances to keep the game scoreless. 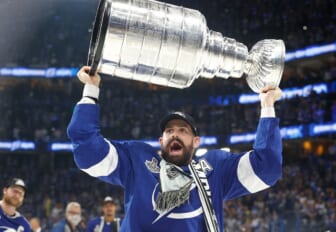 The Blackhawks opened the second period with an offensive flurry, putting five shots on goal within the first two minutes — including a breakaway by Dominik Kubalik.

Binnington stopped them all and the game remained 0-0.

The Blues followed with a push of their own during the wide-open period, with Krug ringing a shot off the post and Ivan Barbashev just failing to lift the puck over the sprawling Fleury into an exposed net.

Early in the third period, Vladimir Tarasenko hit the crossbar from the right circle. Krug finally broke the scoreless tie 7:25 into the period with the man advantage, converting a Tarasenko pass into the right circle with a quick shot. 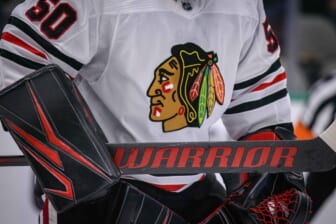 Fleury robbed Tarasenko from the near slot with 4:40 left to play to keep Chicago’s deficit at 1-0.

The Blackhawks pulled Fleury for an extra attacker and mustered one final offensive push during the final minute, but the Blues fended it off.