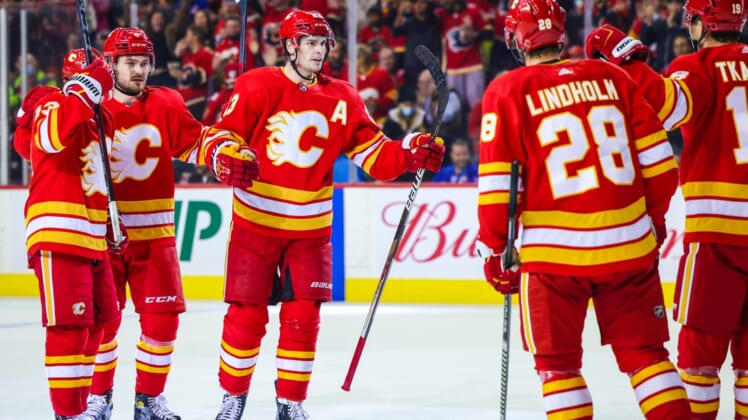 Johnny Gaudreau scored twice and Matthew Tkachuk collected a goal and three assists as the Calgary Flames earned at least one point for the 10th straight game in a 6-0 rout of the visiting New York Rangers Saturday night.

Gaudreau recorded his 27th career multi-goal game to help the Flames improve to 7-0-3 since a season-opening 5-2 loss to the Edmonton Oilers. The Flames also beat the Rangers for the second time this season, outscored New York 11-1 in the two meetings and scored their most goals against them since Feb. 22, 1999.

Sean Monahan scored a power-play goal for the Flames, who bounced back from a pair of overtime home losses to the Nashville Predators and Dallas Stars. Brad Richardson and Milan Lucic also scored.

Jacob Markstrom made 22 saves for his league-leading fourth shutout and the 12th of his career.

The Rangers dropped their third straight after enduring overtime losses in Vancouver and Edmonton. They nearly scored late in the first period but a goal by defenseman Adam Fox was overturned when the Flames challenged for an offsides call.

New York goaltender Igor Shesterkin took his second straight loss and tied a career high by allowing six goals for the second time in his career.

After Monahan one-timed Tkachuk’s cross-ice feed with four minutes remaining in the first, Richardson and Gaudreau scored by crashing the net. 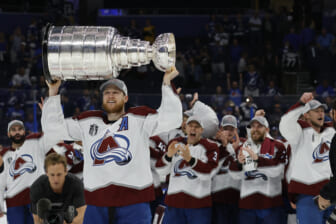 Richardson got his first goal of the season with 10:45 remaining when the Flames sped into the offensive zone. Defenseman Oliver Kylington’s shot from the high slot caromed off the end boards and deflected to Richardson, who easily put a wrist shot from the left side into the vacated net.

With 8:41 remaining, the Flames used sustained pressure to take a 3-0 lead. After the Rangers could not clear, Noah Hanifin took a shot from the right wing that Igor Shesterkin could not handle and Matthew Tkachuk kept it alive, allowing Gaudreau to swoop in uncontested from the left side and tap the rebound into the net.

Gaudreau got his second goal 6:42 into the third by sweeping a backhander past Shesterkin.

Lucic made it 5-0 when his wrist shot knuckled into the net with 6:47 left and Tkachuk scored by putting the puck in between his legs with 5:04 remaining.