Johnny Cueto allowed one run and five hits over seven innings to lead the San Francisco Giants to a 6-1 win against the visiting Los Angeles Angels in the opener of their two-game series on Monday afternoon.

Dylan Bundy remains winless in 10 starts for the Angels this season. Bundy (0-6) went 5 2/3 innings, allowing four runs and five hits, three of which left the yard. He struck out five and walked two in his second career outing in San Francisco.

Justin Upton and Kean Wong had two hits each for the Angels.

Longoria hit the first pitch he saw from Bundy in the fourth inning over the left-center field fence for a two-run homer and a 2-1 lead.

It also ended a string of 18 straight innings without allowing an earned run by the Angels.

Wade slammed a solo homer to right in the fifth to make it 3-1.

Dubon replaced Longoria at third base in the top of the sixth and homered in his No. 5 spot in the bottom half of the inning to make it 4-1.

The Giants tacked on two more runs off the Los Angeles bullpen in the seventh for a 6-1 lead.

The Angels took a 1-0 lead in the second inning after putting runners on the corners with one out.

Cueto almost escaped the inning when Angels catcher Anthony Bemboom hit a hard grounder to Wade at first for a potential double play, but shortstop Brandon Crawford couldn’t get the ball out of his glove for the relay and Jared Walsh scored.

The Angels had few other chances to rattle Cueto, an All-Star with the Cincinnati Reds in 2014 and the Giants in 2016, and a World Series champion with the Kansas City Royals in between. 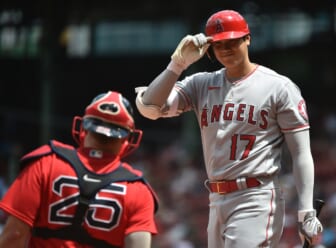 Cueto retired the final seven batters he faced after giving up a 400-foot two-out triple to Wong in the fifth.