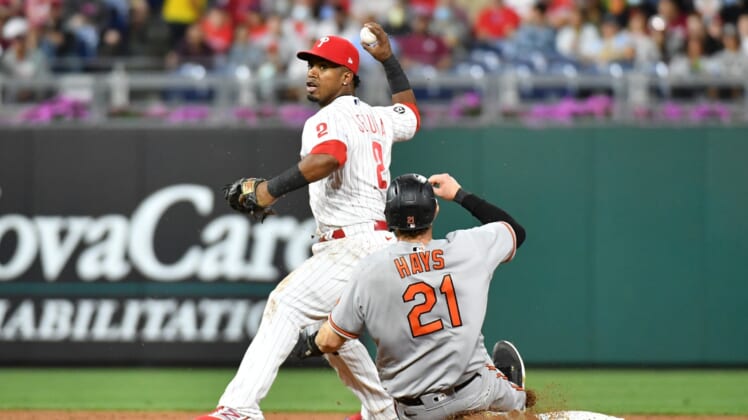 Means (6-7) gave up four hits and one walk while striking out six. Cole Sulser took over and retired all four batters he faced, and Tyler Wells earned his third save with a perfect ninth inning.

The Phillies were limited to four hits, all singles, and they dropped their second in a row.

Philadelphia (76-74) began the night two games behind the first-place Atlanta Braves in the National League East.

The Orioles scored the game’s only runs in the first inning. Austin Hays hit a leadoff single before Ryan Mountcastle struck out. Anthony Santander singled Hays to third, and Severino and Ryan McKenna followed with consecutive RBI singles.

The Phillies managed just one hit through the first five innings, a second-inning single by Andrew McCutchen.

Baltimore’s Pat Valaika singled with two outs in the sixth but was stranded when Richie Martin struck out on Suarez’s 102nd and final pitch.

In the bottom of the sixth, pinch hitter Luke Williams struck out and Odubel Herrera singled. Jean Segura flied out to deep center and Bryce Harper struck out on a curveball to end the inning.

Means doubled with one out in the seventh for the first extra-base hit of his career. Hays grounded out, and Means was thrown out at third by catcher J.T. Realmuto after Sam Coonrod threw an errant pitch to Mountcastle.

The Phillies placed runners on first and third with two outs in the seventh bottom of the seventh, and Freddy Galvis flied out to right on the first pitch from Sulser.

In the ninth, Harper flied out to the fence in center, Realmuto flied out to deep right and McCutchen popped out to catcher Severino just in front of home plate to end the game.