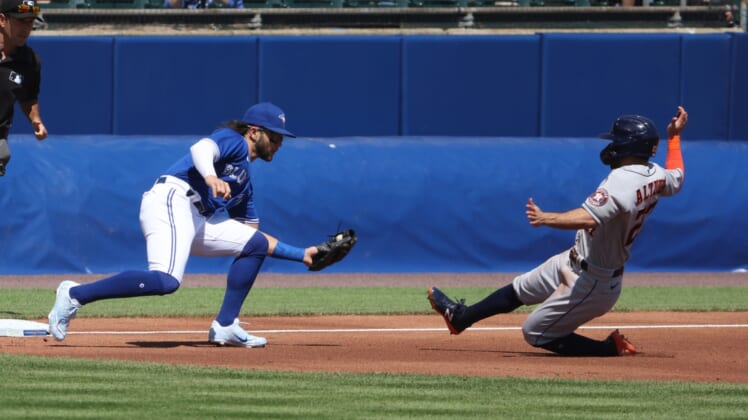 Guerrero had three hits to help Toronto gain a split of the first two contests of the three-game series.

Carlos Correa had three hits for the Astros, who were playing the second game of a nine-game road trip.

Ross Stripling (2-3) allowed one run and seven hits in five innings. The Blue Jays right-hander struck out four while allowing one walk and a hit batter.

Astros right-hander Jose Urquidy (4-3) allowed six runs and nine hits in 4 1/3 innings. He struck out five in taking his first loss since April 21.

Urquidy had won four of his five starts since. He was making his second start on Saturday after spending 19 days on the injured list (shoulder).

A throw from left field by Lourdes Gurriel Jr. prevented a potential Houston run in the third. It caught Myles Straw, who failed to slide, as he tried to score on Jose Altuve’s single. Straw had singled and stole second.

The Astros loaded the bases with two out in the fourth. Yuli Gurriel and Kyle Tucker singled and Aledmys Diaz was hit on the left hand with a pitch that loaded the bases. Diaz left the game and Chas McCormick ran for him. Straw walked to force in a run.

The Blue Jays scored four in the bottom of the fourth. Guerrero led off with an infield single to third, took second on a single by Teoscar Hernandez and scored on Gurriel’s one-out single. Panik followed with his second homer of the season.

Bo Bichette singled with one out in the fifth and Guerrero hit his 18th homer of the season — 13 at home. Enoli Paredes replaced Urquidy.

Tim Mayza replaced Stripling and had a perfect sixth. Trent Thornton followed with a perfect seventh and pitched around a single in the eighth.

Rafael Dolis allowed a walk and a single and a balk to open the ninth. One run scored on Straw’s groundout.