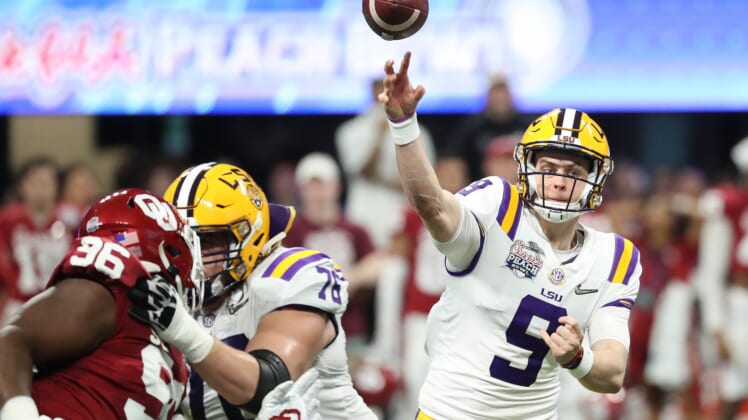 LSU Tigers quarterback Joe Burrow came into the Peach Bowl looking to put on a show as the 2019 Heisman Trophy winner. He is doing just that in the first half of the CFP Semifinal, delivering an incredible touchdown strike for his fourth touchdown of the half.

After throwing three touchdowns in the first quarter with a series of unbelievable throws, Burrow kept dominating in the second quarter. After facing some pressure in the pocket, Burrow rolled out to his right then flicked a deep ball right to Justin Jefferson’s outside shoulder for the 42-yard touchdown.

It was the third touchdown connection between Burrow and Jefferson on the day. On the next drive, the duo connected again for their fourth trip to the end zone.

While the Oklahoma Sooners have focused all of their attention on pressuring Burrow and taking away his top receiver, the senior keeps showing why he’s the best player in college football and a lock to be the No. 1 pick in the 2020 NFL Draft.