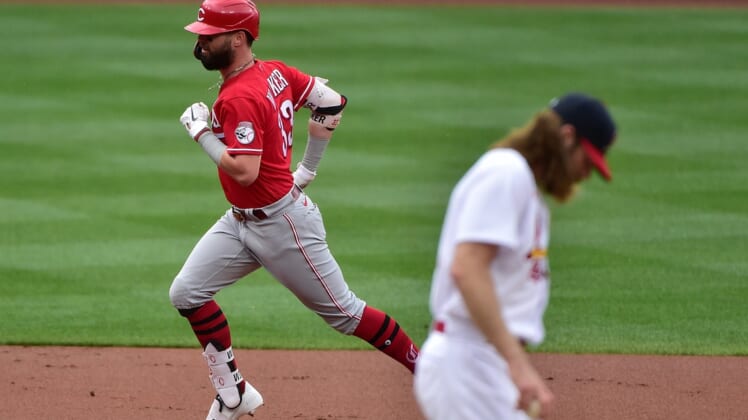 The Cardinals rallied from a 7-0 deficit to tie the game, but Winker’s ninth-inning homer off closer Alex Reyes decided the game.

The Reds won for the sixth time in their last seven games. The reeling Cardinals have lost five consecutive games and seven of their last eight.

Winker’s two-run homer in the first inning gave the Reds an immediate 2-0 lead. His three-run blast in the second inning made it 5-0.

Tyler Stephenson led off the third inning with a single. Shogo Akiyama hit for Tyler Naquin, who exited the game with left hamstring tightness, and stroked a single. Eugenio Suarez’s two-run double made it 7-0.

Miley exited after five innings and the Cardinals rallied to tie the game in the sixth.

Brad Brach relieved Feliz and also failed to get an out. Matt Carpenter hit a two-run double. Edman drove in a run with an infield single, and Dylan Carlson walked to reload the bases.

Tejay Antone relieved Brach and got Paul Goldschmidt to line into a double play. But Arenado hit a two-run single to pull the Cardinals even.

After Winker put the Reds up 8-7, the Cardinals threatened in their half of the ninth. Goldschmidt hit a single and Arenado hit a ground-rule double before Sims retired the next three batters to seal the victory.