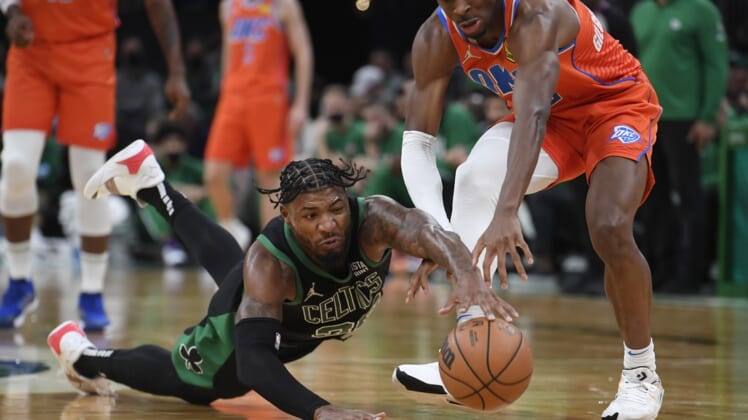 Jayson Tatum had 33 points and eight rebounds, Dennis Schroder scored 29 against his former team, and the Boston Celtics held off the visiting Oklahoma City Thunder 111-105 on Saturday night.

Tatum and Schroder combined for 58 points in Boston’s 130-108 rout of the rival Los Angeles Lakers on Friday. Schroder spent two seasons with Oklahoma City before the Thunder traded him to the Lakers last season. He joined the Celtics this past August.

Grant Williams added 14 points and Al Horford contributed 10 points, 11 rebounds and seven assists Saturday for the Celtics, who have won back-to-back games and have seven victories in their past 10 games overall.

Luguentz Dort had 16 points to lead Oklahoma City. Josh Giddey totaled 15 points and eight rebounds while 2021-22 Thunder leading scorer Shai Gilgeous-Alexander finished with 14 points on 4-of-13 shooting from the field.

Oklahoma City has dropped two straight following a 96-89 defeat at the Milwaukee Bucks on Friday and has lost four of its past five games overall.

Boston led 58-45 at halftime and stretched its lead to as many as 25 in the third quarter. Oklahoma City trailed 89-74 after three and whittled the deficit to four on Dort’s 3-pointer with 11.3 seconds remaining in the game before Boston secured the victory.

In the first quarter, the Thunder led 8-7 following Derrick Favors’ 16-foot jumper with 8:01 left. Tatum’s ensuing pull-up jumper put the Celtics on top for good, and Boston pulled away to build a 30-23 lead after one.

Oklahoma City will conclude its three-game trip at the Atlanta Hawks on Monday night. Boston will play the Houston Rockets on Monday night in the third of four straight Celtics’ home games.