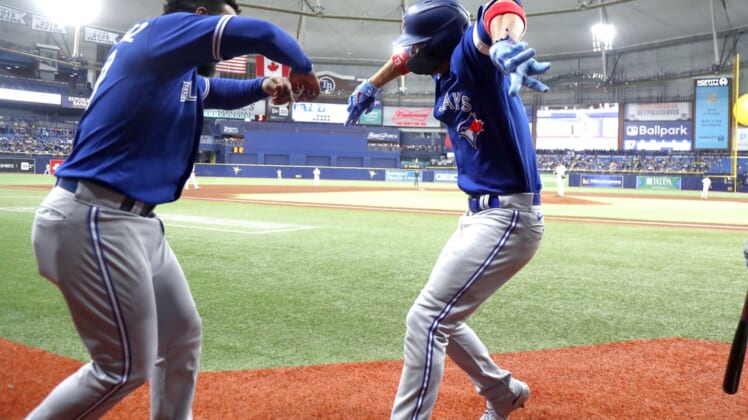 Manoah (7-2) fired six innings and yielded five hits and two runs in running his head-to-head mark against the AL East leaders to 3-1 with a 1.46 ERA.

He fanned seven but issued a career-high six walks — Toronto pitching handed out 11 free passes — and hit a batter.

Lourdes Gurriel Jr. went 2-for-4 with two runs and homered for the second consecutive game.

Vladimir Guerrero Jr. added a single and a double as the Blue Jays (85-66) moved to 16-4 in September by splitting the series’ first two games. Toronto remains 1 1/2 games behind the Boston Red Sox (87-65) in the race for the top American League wild card and a half-game ahead of the New York Yankees (85-67) for the second wild card.

Brandon Lowe and Mike Zunino each produced two-hit games for the Rays (93-59), who left 12 men on base and managed just five hits.

Lowe hit a first-inning single the other way to left for his 86th RBI and a 1-0 lead, but Manoah fanned Yandy Diaz with a high fastball to strand three.

The visitors evened it in the third on an RBI groundout by Breyvic Valera.

In the fifth, Gurriel gave his club its first lead when he turned on a 94 mph four-seam fastball from starter Drew Rasmussen, drilling it to left-center an estimated 435 feet for his career-high 21st homer.

Manoah’s sixth walk led to a 2-2 tie in the bottom of the fifth. Lowe drew a leadoff base on balls and eventually scored on Joey Wendle’s two-out single to right.

Toronto grabbed the lead for good in the sixth against Nick Anderson (0-1) when Bichette’s sacrifice fly to center drove in Marcus Semien for a 3-2 lead.

In the seventh, the Rays turned to Michael Wacha — Wednesday’s scheduled starting pitcher — in an effort to preserve their bullpen and stay in the contest. Wacha yielded a run in the eighth when Teoscar Hernandez singled for his 108th RBI.

Toronto closer Jordan Romano struck out Phillips and Lowe swinging to open the ninth before walking the bases full. However, he induced a flyout to shallow right from Wendle to notch his 20th save in 21 chances.