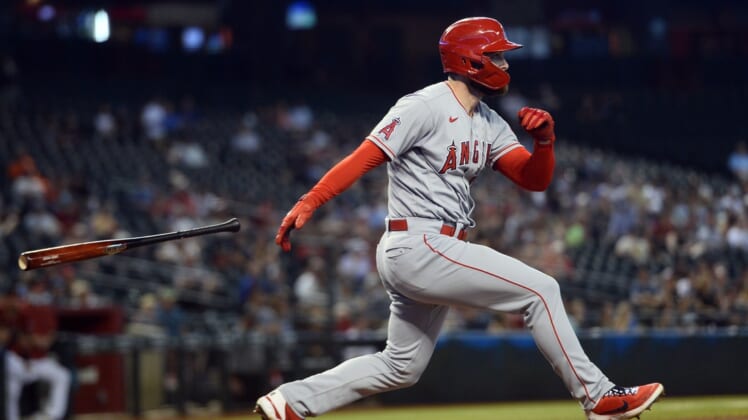 Jared Walsh homered and drove in three runs and the Los Angeles Angels completed a three-game sweep of the Arizona Diamondbacks with a 10-3 win on Sunday afternoon in Phoenix.

Max Stassi homered for the fourth time in his past eight games, Justin Upton had three hits and scored two runs, and David Fletcher and Taylor Ward each had two hits and two runs for the Angels, who have won six in a row to climb above .500 for the first time since May 1.

Stassi hit a 440-foot homer to center with Upton aboard to give the Angels a 2-0 lead in the first inning.

Sandoval helped himself in the second when he showed bunt and then slapped a ground ball single up the middle, putting runners on first and third with one out.

Fletcher drove in a run with a squeeze bunt, and Upton plated two more with a single to center that also involved a fielding error by center fielder Ketel Marte, giving Los Angeles a 5-0 lead.

Walsh followed with a double down the right-field line to make it 6-0.

The Angels have scored at least five runs in eight straight games.

Arizona scored a run on an RBI single by Pavin Smith in the fourth, but the Angels scored two in the sixth on doubles by Ward, Juan Lagares and Fletcher to make it 8-1.

Sandoval was removed after walking the first two batters in the seventh.

Steve Cishek replaced Sandoval and gave up an RBI single to David Peralta to make it 8-2.

Walsh came back with a two-run homer in the eighth to make it 10-2.