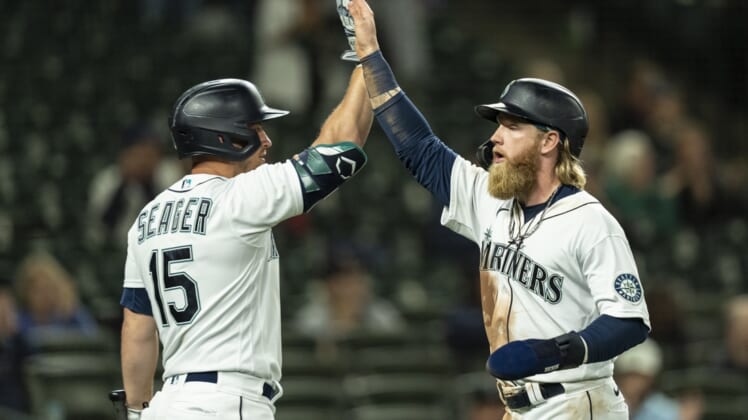 Jake Bauers homered in his first home game in Seattle as the Mariners defeated the Minnesota Twins 4-3 Monday night in the opener of a three-game series.

Bauers, acquired in a trade with Cleveland last Wednesday, went deep to center field off Twins right-hander Hansel Robles (2-3) with one out in the bottom of the eighth inning to break a 3-all tie. The ball just eluded the glove of leaping outfielder Nick Gordon.

Seattle’s Paul Sewald (3-2) got the victory and fellow right-hander Drew Steckenrider pitched a 1-2-3 ninth for his first save of the season.

The Twins scored in the first off left-hander Marco Gonzales. Jorge Polanco led off with a single to center and, an out later, Nelson Cruz singled to left to advance Polanco to second. Trevor Larnach then lined a run-scoring single to right.

Twins right-hander Kenta Maeda walked the bases loaded with one out in the first before getting Dylan Moore to pop out to shortstop Andrelton Simmons and Bauers to strike out to end the threat.

J.P. Crawford got the Mariners’ first hit, a double to center, leading off the bottom of the third. Jake Fraley followed with a line-drive single to center to tie the score at 1-1.

The Twins took a 3-1 lead in the fourth on solo homers by Kirilloff and Celestino, his first in the major leagues.

Seattle tied it in the fifth against right-hander Luke Farrell as Fraley drew a one-out walk and scored on Ty France’s double to left. An out later, Moore tripled to center to make it 3-3.

Neither starter factored into the decision.

Gonzales went five innings and gave up three runs on eight hits, including the two homers. He walked two and struck out five.