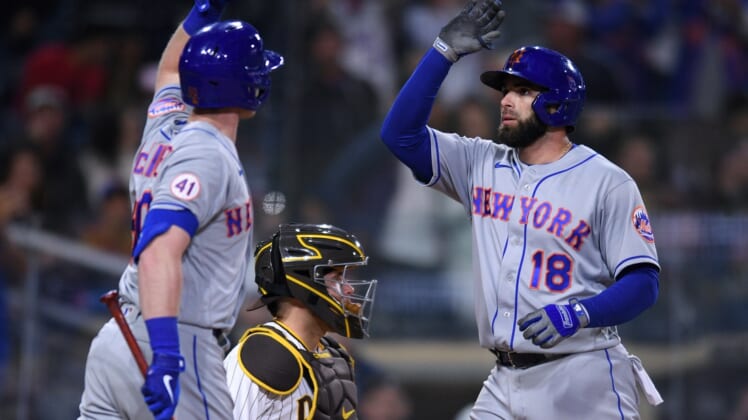 Peraza and Lindor connected off Padres starter Joe Musgrove (4-5) an inning after deGrom struck out Wil Myers and rookie Tucupita Marcano to pitch out of a bases-loaded, one-out jam.

The right-hander worked out of two jams.

Fernando Tatis Jr. opened the second with a sharp ground-ball double inside the first base bag. But deGrom retired the next three hitters on a soft fly to left and two grounders to strand Tatis at third.

The Padres loaded the bases in the bottom of the fourth on a one-out single by Jake Cronenworth, a fielding error by Lindor and an Eric Hosmer single to left that loaded the bases. But deGrom got Myers swinging on a wicked slider and had Marcano take a full-count slider for strike three.

Musgrove had just struck out deGrom to open the fifth and was ahead of Peraza 1-and-2 when the infielder hit a hanging slider into the left field seats to end the scoreless tie. Lindor then hit his fifth homer, pulling a slider into the right field seats.

Musgrove departed after giving up back-to-back singles to Kevin Pillar and Tomas Nido to open the sixth. Pinch-hitter Jonathan Villar greeted Tim Hill to make it 3-0.

The Mets added a fourth run in the top of the ninth against Nabil Crismatt. Lindor opened the inning with a double and scored on a single by Pillar.

DeGrom, Seth Lugo and Edwin Diaz combined on a five-hit shutout with 15 strikeouts.