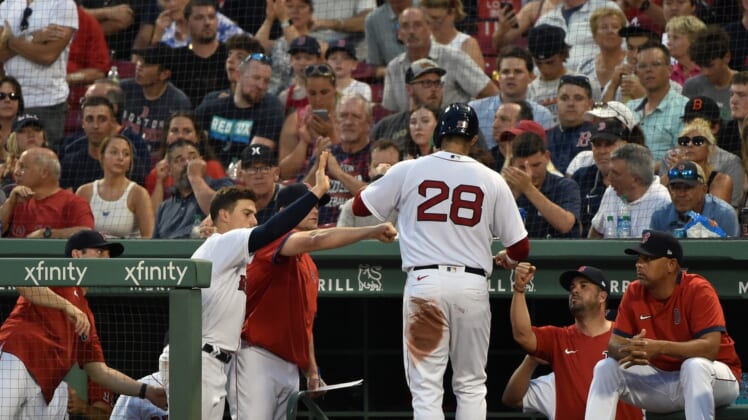 J.D. Martinez sliced a go-ahead two-run double in the sixth inning as part of a four-RBI night, leading the Boston Red Sox past the visiting Kansas City Royals 7-6 in a back-and-forth affair Tuesday.

Martinez (2-for-2) reached base four times to pace a 12-hit attack for the Red Sox, who ran their winning streak to five. Boston came from behind for the second straight night, extending its MLB lead for such victories to 27.

Michael A. Taylor (3-for-3, three RBIs) and Ryan O’Hearn (3-for-5) each slugged two-run home runs among 13 hits for the Royals, who have lost seven straight.

The Red Sox trailed 6-5 entering the sixth when Bobby Dalbec led off with a single off Royals starter Brad Keller. Jake Brentz came on and walked Alex Verdugo with one out, setting the table for Martinez’s game-winning double down the right field line.

Brentz (2-1) took his first major league loss despite striking out the side in the inning. Yacksel Rios (2-0) earned the win.

Adam Ottavino got Jorge Soler to ground out to escape a two-on, two-out jam in the eighth, and Matt Barnes punched out the side in order in the ninth for his 18th save.

Boston’s rally marked the sixth lead change of the contest. Whit Merrifield led off the game with a home run for Kansas City, and Boston plated two in the bottom of the first on RBI singles from Martinez and Xander Bogaerts.

Taylor knotted the score on a single in the second before the Red Sox went back ahead on a Hunter Renfroe sacrifice fly in the third. Taylor’s homer in the fourth made it 4-3 Royals.

Boston scored two in the bottom of the frame, but O’Hearn’s blast in the fifth put Kansas City back ahead, 6-5.

Keller allowed six runs on 10 hits and five walks over five-plus innings. He struck out none.