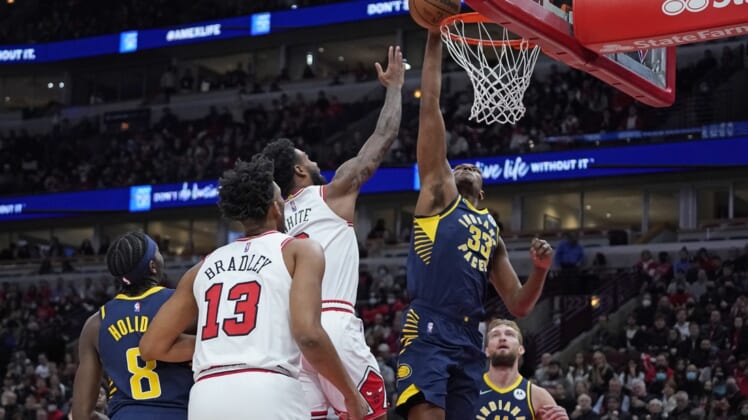 Domantas Sabonis and Myles Turner each registered double-doubles and were among five players in double figures as the visiting Indiana Pacers routed the Chicago Bulls 109-77 on Monday night.

Indiana shot 44.4 percent from the floor and outrebounded Chicago 59-38 to extend its winning streak to two games. The Bulls, who shot 36.5 percent from the field, faced their largest deficit of the early season, trailing by as many as 35 points.

Sabonis amassed 21 points and 11 rebounds. Turner had 12 points and 10 boards in addition to four of the Pacers’ 12 blocks.

The duo of DeMar DeRozan (18 points) and Zach LaVine (17) paced Chicago, which was completing its third back-to-back this season. The Bulls, who beat the visiting New York Knicks on Sunday, have won four of their past six games overall.

Derrick Jones Jr. chipped in eight points and was one of five Bulls to grab five rebounds, sharing the team lead.

Alex Caruso missed the game for Chicago with a bruised left wrist. Bulls coach Billy Donovan said Caruso, one of the team’s top defenders, made every attempt to play but was unable. Caruso is set to undergo testing as the team prepares for a two-game road trip to Houston and Orlando this week.

Brogdon hit a layup at the second-quarter buzzer to give the Pacers a 67-46 halftime lead and put all five Indiana starters in double figures.

Indiana shot 53.2 percent in the first half compared to 46.5 percent for Chicago.

On the night, the Bulls forced 13 turnovers while committing nine.

Nikola Vucevic missed his seventh straight contest for Chicago as he remains in the NBA’s COVID-19 protocol. Vucevic is with the team and began the cardiovascular scanning protocol earlier Monday, Donovan said.