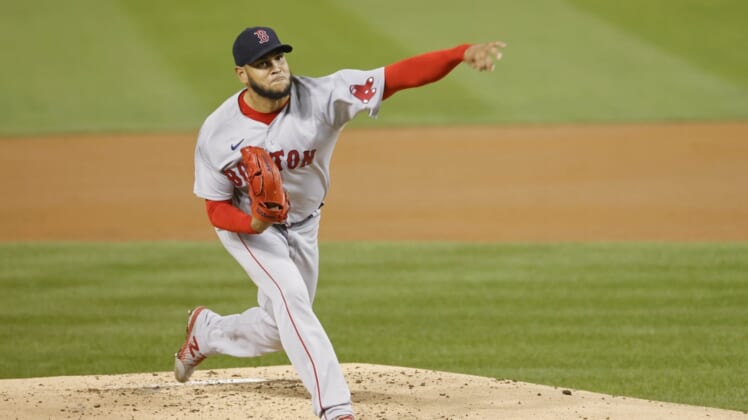 Hunter Renfroe snapped a scoreless tie with a three-run homer in the sixth inning and the visiting Boston Red Sox got a much-needed win, 4-2 over the Washington Nationals on Friday night.

The Red Sox began the night tied with the Seattle Mariners for the American League’s second wild card and leading the Toronto Blue Jays by one game. They trailed New York by two games for the first wild card and homefield advantage in the wild card game.

Josh Rogers (2-2) gave up four runs on seven hits for Washington, which has lost six of its last seven games.

Alcides Escobar and Jordy Mercer had solo homers for the Nationals (65-95). After Mercer’s homer cut it to 4-2 in the eighth, Andrew Stevenson doubled before Adam Ottavino struck out pinch hitter Ryan Zimmerman.

Lane Thomas doubled leading off the first for Washington and Juan Soto walked with one out. Josh Bell flied to right, with both runners moving up, but Rodriguez retired Keibert Ruiz.

The Nationals loaded the bases on a Soto walk and singles by Bell and Ruiz with no outs in the fourth, but Mercer struck out, Carter Kieboom popped out and Stevenson grounded out.

Rodriguez came up with a man on first and no outs in the fifth. He popped up a bunt attempt but stayed in the box. Rogers let it drop and started a 1-6-4 double play.

The Red Sox had baserunners in each of the first six innings and finally broke through in the sixth. Xander Bogaerts singled leading off and J.D. Martinez singled with one out. Renfroe worked the count to 2-2 and then connected with a fastball for his 31st home run, a shot to left center.

Dalbec hit the first pitch he saw into the Red Sox bullpen to make it 4-0.

The first two Nationals reached in the sixth, but Ryan Brasier came on to retire three straight batters.