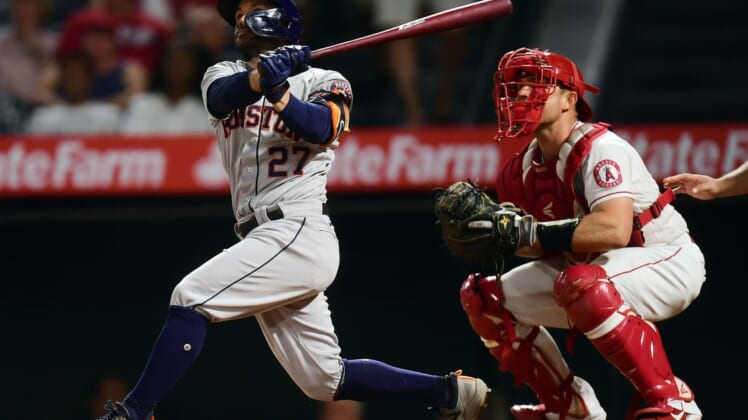 The Houston Astros got home runs from Jose Altuve, Kyle Tucker, Aledmys Diaz and Martin Maldonado in a 10-5 victory over the Los Angeles Angels Tuesday night in Anaheim, Calif.

The win increased the Astros’ lead in the American League West to eight games over both Oakland and Seattle, and reduced their magic number to clinch the division to four.

The Astros had 10 hits in all, including two each from Altuve, Yuli Gurriel and Diaz. The Angels got home runs from Shohei Ohtani, Jack Mayfield and Phil Gosselin.

The home run for Ohtani was his 45th of the season, tying Mike Trout for the second highest single-season total in club history. Troy Glaus holds the club record with 47 in 2000.

The Astros (90-61) took an early lead against Angels starter Packy Naughton (0-3) with three runs in the second inning. Carlos Correa led off with a walk, and Tucker (No. 27) and Diaz (No. 8) followed with back-to-back homers and a 3-0 lead.

The Angels (72-79) got one run back in the bottom of the second on Mayfield’s leadoff homer, his 10th of the season, off Houston starter Jose Urquidy.

The Astros broke open the game with a four-run fifth inning, getting a two-run homer from Altuve and a two-run single from Diaz among their four hits in the inning to go ahead 7-1.

Then in the sixth, Maldonado led off the inning with a home run for the second night in a row before the Astros loaded the bases on an infield single and two walks. Correa drove in a run with a sacrifice fly and Tucker pushed home another when he grounded into a fielder’s choice, putting Houston up 10-1.

Gosselin’s three-run homer for the Angels in the bottom of the sixth spoiled what had been an impressive performance by Urquidy. Urquidy (8-3) still got the win after allowing four runs and six hits in 5 1/3 innings.

The Angels, who have lost five in a row, scored their fifth run in the eighth on Ohtani’s homer.