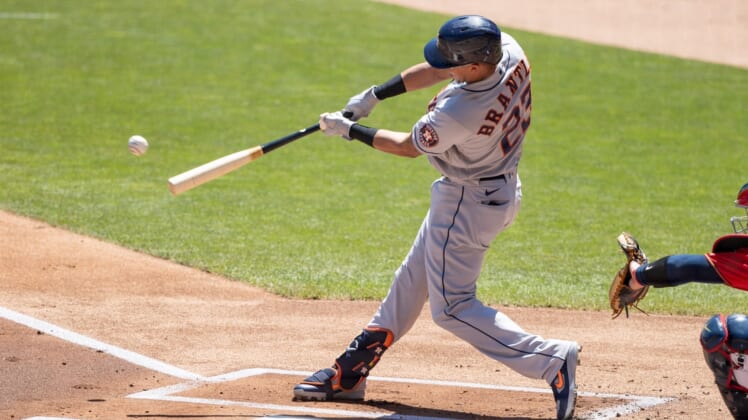 Michael Brantley went 4-for-5 with three doubles and four RBIs Sunday afternoon as the Houston Astros bashed a season-high 20 hits en route to a 14-3 victory over the Minnesota Twins in the rubber game of their three-game series in Minneapolis.

Kyle Tucker, Yordan Alvarez and Chas McCormick each homered for the Astros, who clubbed seven doubles to go along with the three home runs. It marked the third time this season Brantley had three doubles in a game.

Framber Valdez (3-0) picked up the win allowing two runs (one earned) on five hits and three walks over seven innings. He struck out two.

Nelson Cruz and Ryan Jeffers homered for Minnesota and Trevor Larnach had a double and two hits as the Twins lost for the fourth time in their last six games. Michael Pineda (3-4) left after four innings with right forearm tightness, taking the loss allowing three runs on six hits before the Astros erupted on three Minnesota relievers.

Houston jumped out to a 1-0 lead in the first inning when Jose Altuve singled on Pineda’s first pitch of the game, advanced to third on a double by Brantley, and scored on a sacrifice fly by Alex Bregman.

Tucker’s 13th homer of the season, a two-run shot to center, extended the Astros lead to 3-0 in the fourth inning. They made it 5-0 in the fifth on a sacrifice fly by Yuli Gurriel and an RBI double by Carlos Correa.

Minnesota cut it to 5-1 in the bottom of the fifth on Jeffers’ third home run of the season, a 414-foot line drive into the second deck in left.

But Houston broke the game open with a four-run sixth off reliever Randy Dobnak highlighted by a two-run double by Brantley and a two-run homer by Alvarez.