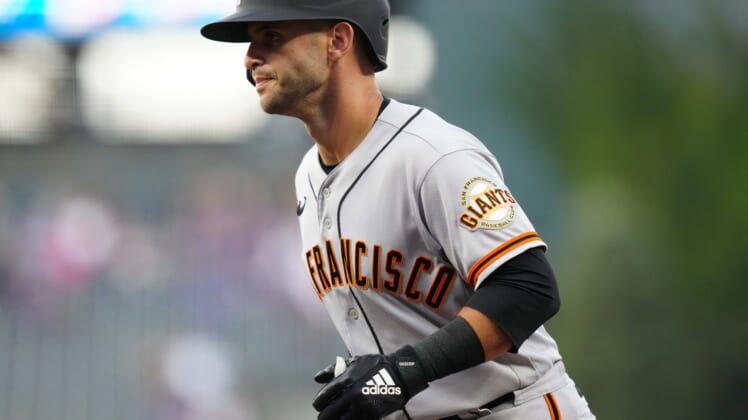 Tommy La Stella and Brandon Crawford had three hits with a home run, Brandon Belt also homered among his two hits, and the San Francisco Giants beat the Colorado Rockies 7-2 in Denver on Friday night.

Mike Yastrzemski also went deep and Kervin Castro (1-0) pitched two innings of relief for the Giants (100-54), who stayed alone atop the National League West with the win. It was Castro’s first win in the majors.

Rockies right-hander Peter Lambert made his first start in more than two years Friday night. He underwent Tommy John surgery in July 2020 and slowly worked his way back. Lambert left the game after allowing two runs and tossing 65 pitches in 3 2/3 innings.

San Francisco wasted no time in welcoming him back to the majors. La Stella homered to left on the second pitch of the game to put the Giants ahead 1-0. It was his seventh of the season.

Colorado responded in the bottom of the inning. Tapia and Rodgers led off with singles against Alex Wood, and after a strikeout Blackmon singled to left to drive in Tapia with the Rockies’ first run.

Wood fanned C.J. Cron but Diaz blooped a single to left to bring home Rodgers and make it 2-1.

Crawford tied it in the second when he homered into the second deck in right field, 442-foot shot, for his 22nd blast of the season.

Wood left after allowing two runs on six hits and striking out seven in four innings. The game was tied when he left but Belt put San Francisco in front in the sixth inning with a solo homer, his team-leading 27th, to make it 3-2.

The Giants put it away in the seventh against Ashton Goudeau (1-1). Crawford and Evan Longoria led off with singles and Yastrzemski cleared the bases with this 25th home run to make it 6-2.

San Francisco added another in the inning on Buster Posey’s RBI single.