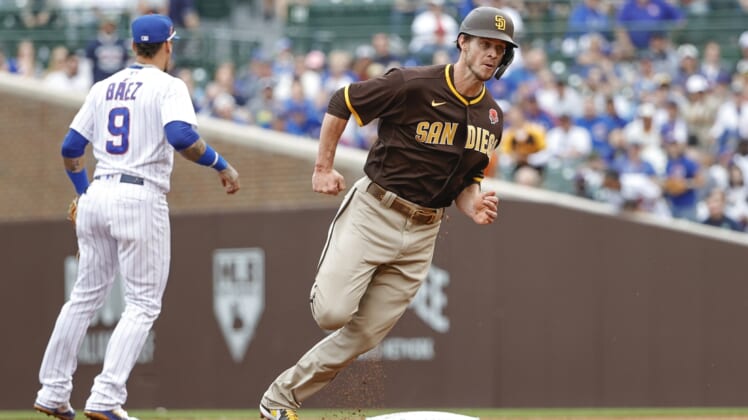 Javier Baez and Patrick Wisdom each hit a pair of home runs and Kris Bryant added his own two-run shot as the Chicago Cubs defeated the visiting San Diego Padres 7-2 on Sunday.

All seven Cubs runs scored on the five home runs with the wind blowing out at Wrigley Field.

Cubs right-hander Kohl Stewart allowed one unearned run on three hits and a walk with two strikeouts over five innings to earn his first major league win since 2019. Stewart was a last-minute call-up from Triple-A Iowa when scheduled starter Trevor Williams was forced to undergo an emergency appendectomy.

Fernando Tatis Jr. homered for the Padres in the top of the sixth off reliever Keegan Thompson to move into a tie for the major league lead with his 16th. Tatis scored the other Padres run in the second inning when he reached on an error by Baez and scored on a Wil Myers single.

Three of the Cubs homers, and five of the runs, came against Padres starter Chris Paddack (2-4), who gave up five runs on six hits with a walk and six strikeouts in 4 1/3 innings.

Bryant tripled past a diving center fielder Jurickson Profar with two outs in the third inning to extend his hitting streak to 13 games. Baez then launched his first home run of the game deep into the stands in left center to put the Cubs ahead 2-1.

Wisdom hit a solo shot, with two out in the fourth to up the Cubs’ lead to 3-1. Bryant followed a pinch-hit double by Sergio Alcantara in the fifth with a two-run homer, his 12th, to make it 5-1 and drive Paddack out of the game.

Tatis and Wisdom exchanged solo homers in the sixth. Baez hit his second homer of the game, and 13th of the season, off Nabil Crismatt in the seventh. It was the first two-homer game for Wisdom, who has three on the season.

The victory was the Cubs’ seventh in their last eight games, and they are 12-3 over their last 15 games. The Padres lost consecutive games for the first time since May 7-8. Both teams finished May with 19-8 records.