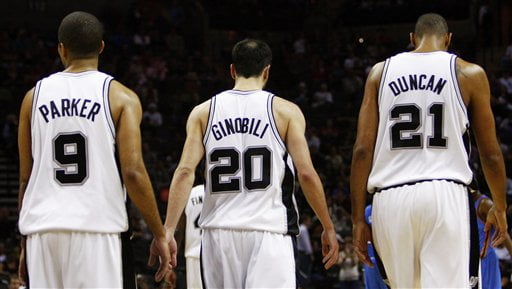 The Big Three have left their mark on the NBA. Photo: blog.ticketcity.com

Thursday evening was a special one for the San Antonio Spurs and those who helped make this one of the best organizations in sports history.

A star with the team for 16 years, future Hall of Famer Manu Ginobili had his jersey retired at AT&T Stadium.

Not only was this a special moment for the four-time NBA champion, Spurs head coach Gregg Popovich showed the emotion and passion that has made him an all-time great.

Here, Pop pays his respects to a player he saw saw flourish under his leadership.

Prior to that, former teammate Tony Parker roasted Manu in front of a packed crowd in San Antonio.

From being selected in the second round of the 1999 NBA Draft to making his debut with the in 2002 and hanging it up last season, Ginobili was one of the unsung heroes for a Spurs dynasty.

Pop made sure that Manu knew exactly how he felt about the player and the man.

The Spurs continue to be all class. They showed that and a whole lot more Thursday evening in San Antonio. Well done.