WATCH: Giants get off to fast start in victory over Padres 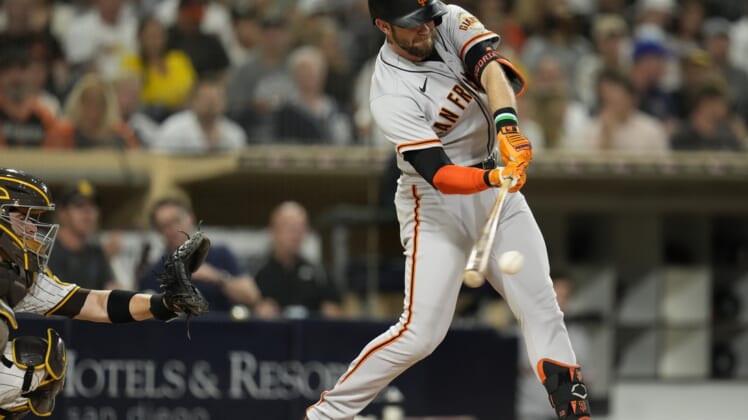 Coupled with a Los Angeles Dodgers loss at Colorado earlier in the evening, the Giants (99-53) moved two games ahead of the second-place Dodgers (97-55) in the NL West with 10 to go.

Fernando Tatis Jr. belted his 40th home run for the Padres (76-75), who lost for a fifth straight time and fell six games off the pace in the NL wild-card race with 11 games remaining.

En route to their fourth win in their last five games, the Giants did all their scoring in three innings, starting with the three in the first against Padres starter Vince Velasquez (3-8). Tommy La Stella reached base on catcher’s interference, Brandon Belt on a walk and Posey on the first of his four hits to set the stage for Bryant’s blast to right-center field.

Velasquez was pulled after one inning, having allowed three runs (two earned) and two hits. He walked one and struck out two.

The lead was just 3-1 before Brandon Crawford and Mike Yastrzemski drove in runs in the sixth, setting up a three-run seventh that broke the game open. Posey’s second double drove in the inning’s first run, after which LaMonte Wade Jr. lashed a two-run single.

The Padres’ best chance to catch the Giants came in the fifth, when, down 3-0, a pinch-hit single by Jake Marisnick sandwiched walks to load the bases with one out against San Francisco starter Scott Kazmir.

The game’s second catcher’s interference, this one on Posey, scored the Padres’ first run and ended the night for Kazmir. But Camilo Doval came on to strike out Manny Machado and get Tommy Pham to ground into a double play, stalling the rally at 3-1.

Doval (4-1), who pitched only the fifth inning, was credited with the win after Kazmir had gone four-plus innings, charged with one unearned run on four hits. He walked three and struck out three.

Tatis’ homer, a solo shot, came in a three-run eighth that included RBI singles by Machado and Eric Hosmer.

The Padres made it interesting in the ninth when Tatis came up with two on and two out, representing the potential winning run. But Tyler Rogers, who had already allowed two runs, got him to fly out to deep left field, preserving the win.

Posey scored three times, while La Stella and Belt had two runs apiece for the Giants, who have no more games remaining against the second-place Dodgers.

Hosmer matched Posey with four hits, while Tatis, Machado and Trent Grisham added two apiece for the Padres, who out-hit the Giants 13-12.