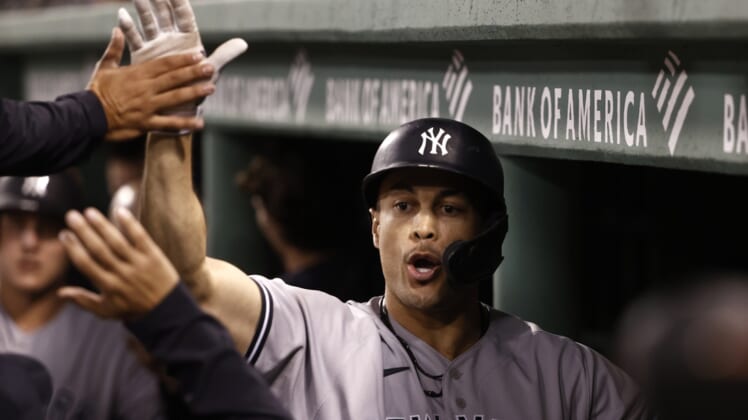 Giancarlo Stanton blew the game open early with a three-run home run, and the New York Yankees held on to beat the host Boston Red Sox 8-3 in the opener of a pivotal three-game series Friday night.

Stanton finished with three hits and four RBIs as the Yankees (87-67) won their fourth straight to get within a game of the Red Sox (88-66) for the top wild card in the American League. Gleyber Torres (3-for-5) added a solo homer for New York.

Rafael Devers crushed a three-run homer for Boston, which had a seven-game winning streak snapped.

The Yankees wasted no time getting on the board as DJ LeMahieu and Anthony Rizzo each singled ahead of an Aaron Judge RBI double to begin the first inning. Stanton drove in another run on a groundout, and Torres singled Judge home with two outs for a 3-0 advantage.

Red Sox starter Nathan Eovaldi completed a 1-2-3 second on seven pitches before New York ended his night in the third. Stanton followed a double and a walk with an opposite-field blast into the bullpen for his 32nd homer, and Eovaldi put two more men on before getting the hook with two outs.

Hirokazu Sawamura came in and looked to escape the jam on two pitches, but first baseman Kyle Schwarber missed an infield pop-up off the bat of Kyle Higashioka to allow the Yankees a 7-0 lead. New York sent 10 to the plate in the inning.

Gerrit Cole, meanwhile, cruised on the mound for New York. He didn’t allow his first hit until the fourth and finally faltered in the sixth when Devers pulled his 35th homer down the line in right to get Boston within 7-3.

Torres completed the scoring with his solo shot just over the wall in center to begin the seventh off Martin Perez.