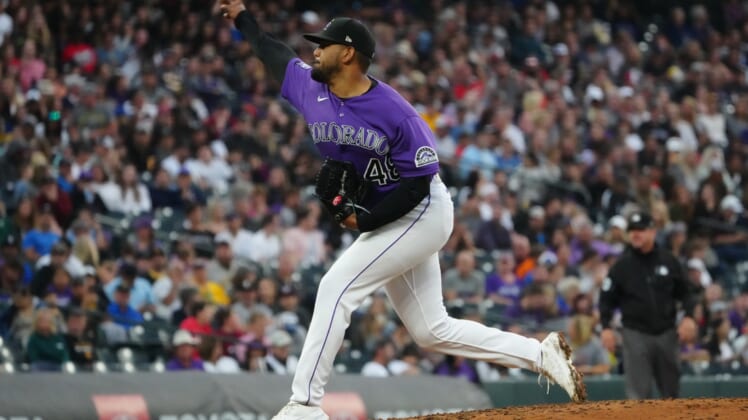 German Marquez took a no-hitter into the ninth inning before settling for a complete-game one-hitter as the Colorado Rockies beat the Pittsburgh Pirates 8-0 on Tuesday night in Denver.

Marquez (7-6) was bidding to become the second pitcher in franchise history to throw a no-hitter, but Ka’ai Tom led off the ninth with a sharp single to right.

The 26-year-old right-hander, who also doubled twice, walked one, hit a batter and struck out five while throwing just 92 pitches.

He got an ovation after Tom’s single.

The Pirates have been shut out in consecutive games at Coors Field to begin a three-game series.

Story made a couple of plays at shortstop to keep Pittsburgh hitless. In the seventh inning, Ke’Bryan Hayes hit one off the mound that Story scooped up at second and threw to first for the out.

Jacob Stallings led off the eighth with a liner headed for left field before Story made a leaping catch to snare it.

Colorado jumped ahead in the second inning. With one out, Ryan McMahon singled and scored on Hampson’s double to center field. Fuentes singled to right on the next pitch, giving Colorado a 2-0 lead.

The Rockies added to the lead in the fifth, and Marquez was part of the rally against Pirates starter Chase De Jong. Diaz led off with his fourth home run and second in as many games, and Marquez followed with a double down the third base line.

Marquez moved to third on a groundout and then scored when Blackmon beat out an infield single with two outs. Story followed with a double to make it 5-0. It was Story’s 700th career hit.

De Jong (0-3) allowed five runs on nine hits and no walks while striking out three in five innings.

Marquez helped himself again in the sixth when his double to center scored Fuentes from first. Marquez scored on Raimel Tapia’s double to make it 7-0.

Story’s RBI single in the seventh finished the scoring.