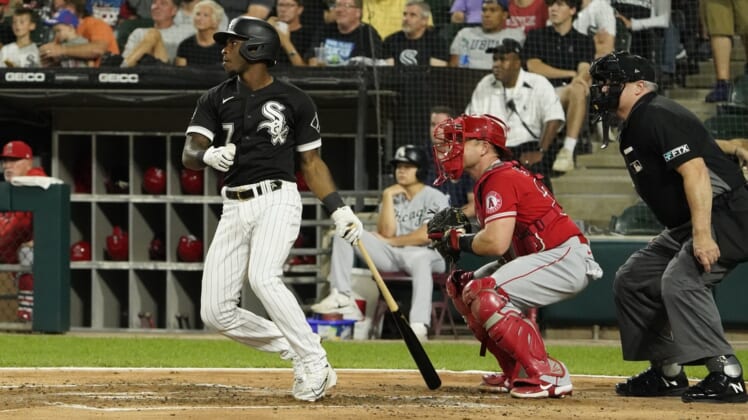 Gavin Sheets drilled a three-run home run as part of a 3-for-4, four-RBI night and Luis Robert homered among his two hits to power the host Chicago White Sox to a 9-3 victory against the Los Angeles Angels on Tuesday night.

Chicago (83-61) narrowed to seven its magic number to clinch the American League Central title behind a 13-hit attack. After falling behind 1-0 on Phil Gosselin’s first-inning home run against Lucas Giolito, the White Sox responded with six unanswered runs over the second and third innings.

Robert started the spurt with a solo home run against Angels starter Packy Naughton in the second, while Sheets punctuated a four-run, third-inning outburst with his blast off reliever Andrew Wantz. Sheets finished a triple short of the cycle.

Leury Garcia and Cesar Hernandez both added two hits and an RBI for Chicago. Leadoff hitter Tim Anderson, reinstated from the 10-day injured list before the game after recovering from a left hamstring strain, went 1-for-5. Yoan Moncada added a hit for the White Sox to extend his on-base streak to 24 games.

Giolito, who last pitched Aug. 31 as he also contended with hamstring issues, returned from the injured list to throw four innings of three-run, three-hit ball. He walked two and struck out eight.

Jared Walsh hit a two-run homer against Giolito in the fourth to draw the Angels within 6-3.

Los Angeles (70-74) loaded the bases in three subsequent innings but was unable to score. Luis Rengifo struck out to end the threat in the fifth before David Fletcher rolled into an inning-ending double play in the sixth. Juan Lagares grounded into a double play to end the eighth.

Naughton (0-2) allowed four runs and six hits in 2 2/3 innings with one walk and two strikeouts.

Angels outfielder Jo Adell, who did not play, remains day-to-day with hip and backside soreness. Adell was injured upon colliding with the left field wall during Saturday’s game in Houston, and he hasn’t played since.