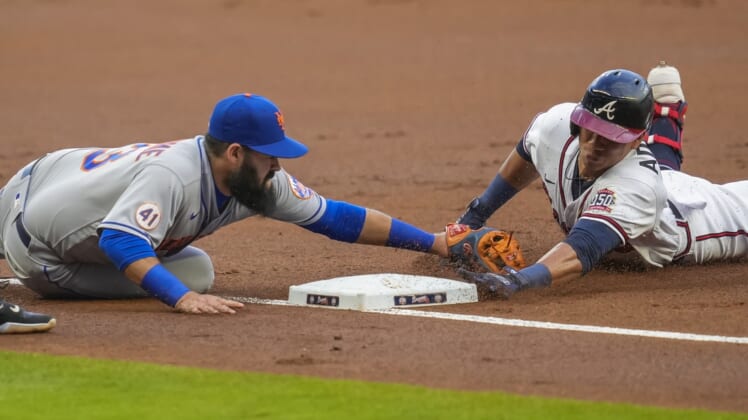 Atlanta first baseman Freddie Freeman, who had struck out his first four trips to the plate, drove in the winning run with a walkoff infield single as the Braves beat the visiting New York Mets 4-3 on Thursday.

With the bases loaded and two outs, Freeman lined a pitch from Seth Lugo (1-1) off the pitcher’s leg. The ball ricocheted to third baseman Luis Guillorme, but Freeman just beat the throw to first base, allowing Guillermo Heredia to score the winning run.

New York’s Dominic Smith had the first two-homer game of his career, the most important one coming to lead off the ninth inning against Atlanta closer Will Smith that tied the game at 3. Despite the blown save, Smith (2-5) was the winning pitcher.

The game started as a pitching duel between New York’s Jacob deGrom and Atlanta’s Ian Anderson.

DeGrom gave up five hits in the first one-plus innings but did not permit another hit in his seven-inning stint. He retired the final 18 players he faced, including a stretch of eight straight via strikeout. It was the fourth time that he’s fanned eight in a row.

DeGrom finished with 14 strikeouts – three of those against Freeman — the third time he’s reached that mark this season and one short of his career high.

The Mets got the first run of the game in the first inning. Francisco Lindor walked, stole second and scored on Michael Conforto’s RBI single to center.

The Braves started their rally in the bottom of the first when Ehire Adrianza tripled to right field. Adrianza, who was a late addition to the lineup when Ronald Acuna Jr. was scratched because of back soreness, was originally called out. The Braves challenged the call and it was overturned.

Adrianza scored on a one-out single by Ozzie Albies. That set up Austin Riley’s two-run home run, his 14th, to put Atlanta ahead 3-1.

The Mets cut the lead to 3-2 in the seventh inning on Smith’s solo shot.