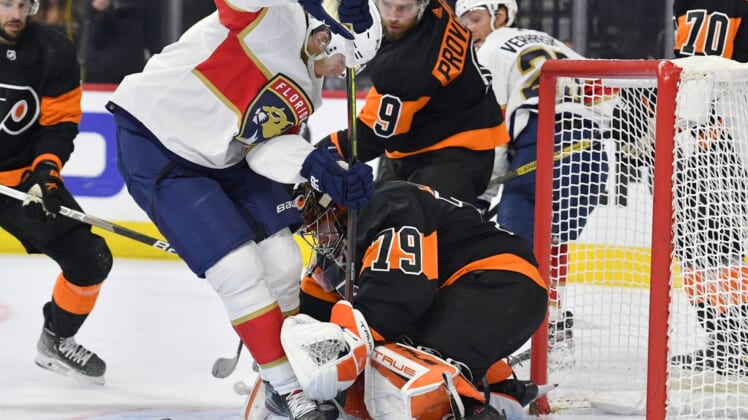 Jonathan Huberdeau scored two goals and added one assist to lift the Florida Panthers past the host Philadelphia Flyers 4-2 on Saturday.

Owen Tippett and Sam Reinhart contributed one goal each for the Panthers, who have won all five games to open the season for the first time in franchise history.

The Panthers were awarded seven power plays, scoring once.

Claude Giroux and Cam Atkinson scored one goal apiece for the Flyers, who had their two-game winning streak snapped.

The Panthers took a 1-0 lead 17 minutes into the first period when Huberdeau fired a wrist shot on the power play past Hart.

Florida dominated the first and led 10-6 in shots.

The Flyers came out aggressively to open the second and were given a power play at 3:01. Sean Couturier ripped a slap shot on goal just six seconds in and Bobrovsky made the save. After several more chances, Giroux connected at 4:23 to tie the game at 1.

Soon after the Panthers proceeded on their third power play, Reinhart turned the puck over and Atkinson skated in all alone and scored short-handed at 10:53 for a 2-1 Flyers lead.

The Panthers equalized at 2 with only 26.6 seconds remaining in the second when the puck ricocheted off Tippett’s skate and into the net.

The pace was frenetic through the first five minutes of the third, with numerous scoring opportunities on both sides.

Florida took a 3-2 lead at 7:53 of the period when Huberdeau scored a short-handed goal. The shot from behind clanged off the back of Hart’s pad.

Nicolas Aube-Kubel nearly tied the game at 15:10, but Bobrovsky turned away the point-blank shot.

Hart was pulled for an extra skater with two minutes left, and Reinhart scored into the empty net at 18:48.