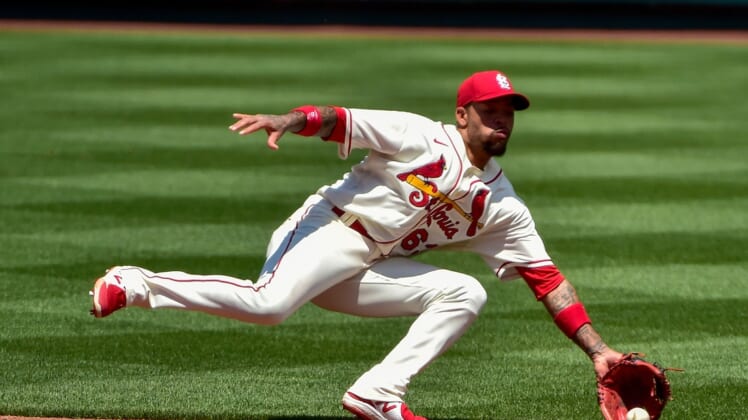 Eugenio Suarez hit a two-run homer in the sixth inning to lift the visiting Cincinnati Reds to a 5-2 victory over the St. Louis Cardinals on Saturday.

Tejay Antone bridged the gap to Lucas Sims, who worked out of a ninth-inning jam for his fifth save.

The Reds have won three in a row and five of their last six games.

The Cardinals have lost four straight games and six of their last seven.

The Cardinals got just four innings from starting pitcher Johan Oviedo, who allowed two runs on three hits and two walks. Ryan Helsley (3-4), the second of their four pitchers, took the loss.

Tommy Edman led off the first inning with a double and scored on Nolan Arenado’s single to give the Cardinals a 1-0 lead.

Jonathan India tied the game in the third inning with a solo homer. After hitting three home runs prior to this series, India went deep in back-to-back games.

The Reds moved on top in the fourth inning. Tyler Naquin hit a double and scored on Tucker Barnhart’s RBI single.

The Cardinals tied the game at 2 in the bottom of the inning after Paul Goldschmidt hit a leadoff triple and scored on Arenado’s RBI single.

Tyler O’Neill hit a one-out double and Matt Carpenter walked to load the bases, but Edmundo Sosa struck out and John Nogowski flew out to strand them.

Barnhart drew a walk off Helsley in the sixth inning and Suarez followed with his homer to put the Reds up 4-2.

Jesse Winker drew a walk from Genesis Cabrera in seventh inning and Nick Castellanos followed with a single to extend his hitting streak to 21 games.

Winker scored on Andrew Knizner’s throwing error to make it 5-2. The Cardinals got runners to second and third with one out in the bottom of the ninth, but Sims closed them out.