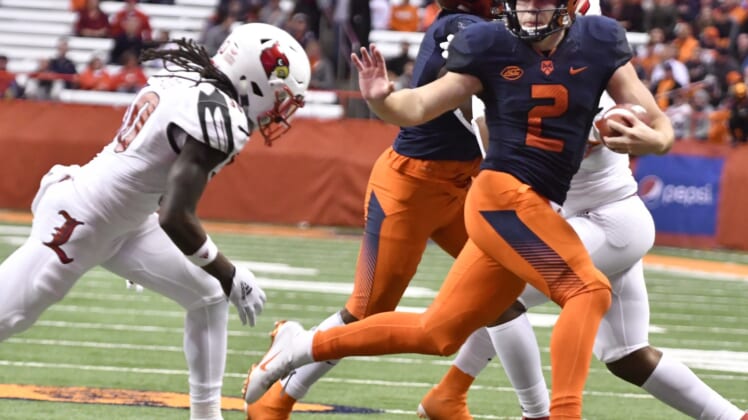 In a 2018 collegiate bowl season that hasn’t been quite as thrilling as expected, Syracuse Orange quarterback Eric Dungey and running back Moe Neal got everyone on their feet with a sensational play in the Camping World Bowl.

Dungey dropped back in the pocket and faced pressure almost immediately but moved away to avoid the pass rusher. Even more heat came and forced him further backwards and on the run with utter disaster looming.

The senior somehow pulled a rabbit out of his hat by tossing the ball to Neal right as multiple defenders tried to bring him down for the sack.

Spectacular, this was the play that setup the Syracuse TD!!!!!!! #CampingWorldBowl pic.twitter.com/bpg4xCG88B

Neal caught the ball seven yards behind the line of scrimmage, made two defenders miss in open space then split between two defenders and kept his balance and exploded for a 42-yard gain.

At any moment, this play easily could have ended in embarrassing fashion. Dungey could have been sacked for a huge loss or turned the ball over with no one to stop a potential defensive return.

Yet somehow he survived the play, made the throw and Neal kept the magic going with an insane run. Just one play later, Jarveon Howard ran in a four-yard touchdown to give Syracuse a 34-18 lead with less than 10 minutes left in the game.