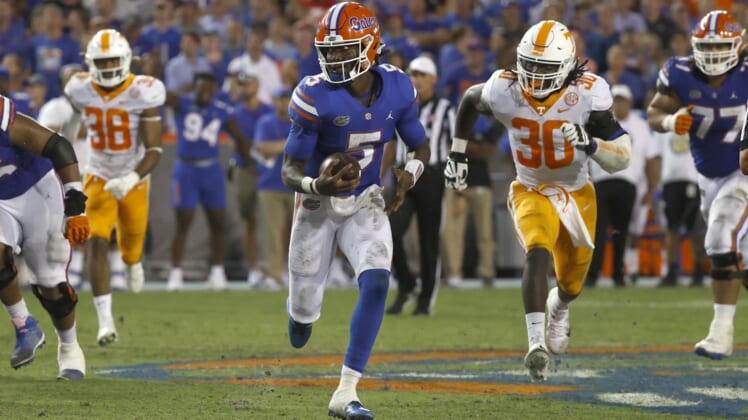 Emory Jones threw for 209 yards and ran for 144 Saturday night as No. 11 Florida pulled away from Tennessee in the second half for a 38-14 SEC win in Gainesville, Fla.

Jones completed 21 of 27 passes with two touchdowns and no interceptions, marking the first time in four games that he hadn’t tossed a pick. Jones threw five in his first three games. In this one, he spearheaded a balanced effort by the Gators (3-1, 1-0 SEC), who finished with 505 total yards.

Volunteers quarterback Hendon Hooker hit 13 of 23 passes for 221 yards with two touchdowns and no interceptions before leaving with just under nine minutes left in the game with an undisclosed injury.

Tennessee (2-2, 0-1) moved the ball well in the first half but cooled off after halftime, getting blanked over the final 30 minutes as it lost to the Gators for the 16th time in 17 games.

Florida initiated scoring at the 9:20 mark of the first quarter when Jones hit Malik Davis with a 4-yard touchdown pass. The Volunteers answered back just over two minutes later when Hooker hooked up with Tiyon Evans for a screen pass that went 47 yards for a tying score.

After Jace Christmann toed a 47-yard field goal for the Gators, Tennessee took its only lead when Hooker took advantage of a coverage bust, hitting JaVonta Payton on a go route down the left-side numbers for a 75-yard touchdown.

The Gators took the lead for good with 4:15 left in the first half as Nay’Quan Wright zipped 23 yards to make it 17-14 at the half.

Florida used a double pass to cap its first drive of the third quarter. Jones hit Trent Whittemore with a lateral to the left side and he connected with Kemore Gamble on a 13-yard touchdown.

Jones added a 9-yard scoring strike to Rick Wells with 2:04 remaining in the third to make it 31-14 and Davis tacked on a 9-yard touchdown run at the 1:39 mark of the fourth quarter.