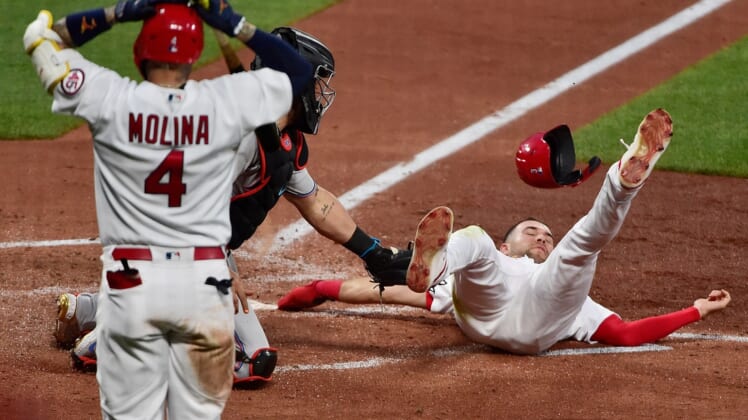 The Cardinals won for just the third time in their past 14 games.

With the game tied 2-2, Dylan Carlson drew a leadoff walk in the eighth off Dylan Floro (2-4). Paul Goldschmidt’s single moved Carlson to second. One out later, O’Neill blasted a tiebreaking double. Following an intentional walk to Yadier Molina, DeJong hit a run-scoring dribbler up the first base line.

Giovanny Gallegos (4-1) pitched a perfect eighth inning to earn the victory and Alex Reyes fired a 1-2-3 ninth for his 17th save.

Miami has lost two in a row after a three-game winning streak.

The Reds threatened in the second inning but failed to score. Adam Duvall hit a one-out single and tried to score on a two-out double by Magneuris Sierra.

Cardinals catcher Molina dropped the relay throw home, but Duvall didn’t touch the plate on his slide. Molina recovered the ball and tagged out Duvall as he tried to scramble back and touch home.

In the bottom of the inning, Molina singled, Paul DeJong walked and Edmundo Sosa lined a RBI single into left field to put the Cardinals up 1-0.

The Marlins took a 2-1 lead in the third inning with a two-out rally. Jon Berti hit a single, and Wainwright walked Starling Marte and Jesus Aguilar before allowing Jazz Chisholm Jr.’s two-run single.

The Cardinals had a chance to tie the game in the bottom of the inning. Carlson hit a single and tried to score on O’Neill’s double, but he missed the plate standing up and was tagged out by catcher Jorge Alfaro while returning to touch home.

In the fifth inning, the Cardinals pulled even at 2-2 when Tommy Edman doubled and scored on Goldschmidt’s RBI single.