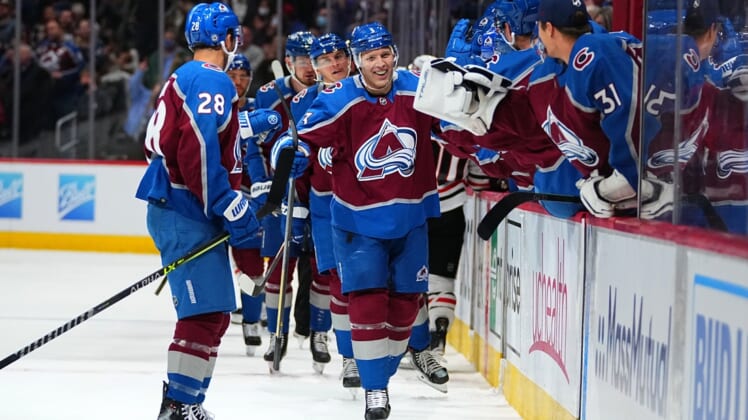 Gabriel Landeskog, Bowen Byram and Nazem Kadri each had a goal and an assist, Jack Johnson also scored, and the Colorado Avalanche beat the Chicago Blackhawks 4-2 on Wednesday night in Denver.

Colorado scored the first three goals in a game that was the season opener for both teams.

Darcy Kuemper made 32 saves for Colorado, which played without head coach Jared Bednar and center Nathan MacKinnon, both away from the team due to COVID-19 protocols. Both are asymptomatic and could return Saturday if they test negative multiple times.

The Avalanche took the early lead when Andre Burakovsky passed to Johnson, who was skating down the middle of the ice. Johnson came in alone on Fleury after Chicago’s Tyler Johnson and Jack McCabe collided, and he beat Fleury high with a backhand at 4:26 of the first period.

It didn’t take long for Colorado to add to the lead. Cycling the puck down low, Landeskog passed to Erik Johnson at the point. Erik Johnson’s shot went of Kadri and then Landeskog and past Fleury at 5:48.

Byram made it 3-0 midway through the first when he came down the left side, got a pass from Landeskog from the other side of the zone and beat Fleury over his left shoulder at 9:34. It was Byram’s first NHL goal in his 20th game.

The Blackhawks got one back on a power play late in the first period when Kubalik’s blast from the right point beat a screened Kuemper at 16:47.

Chicago had a great chance in the second period when Kirby Dach poked the puck from Samuel Girard and went in alone on Kuemper. Dach tried to go between the goalie’s pads, but Kuemper made the save to keep it a 3-1 game.

Kuemper stopped another Dach attempt minutes later, and then Kadri scored at 16:12 to make it 4-1.

Murphy got the Blackhawks within two goals when he scored at 15:13 of the third period.

Chicago got a power play late in the third and Fleury went off for an extra skater with 3:26 left, but the Blackhawks didn’t score again.