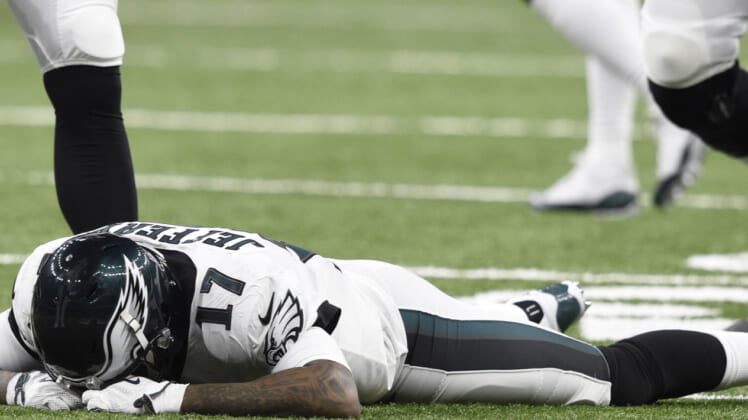 No one in the city of Philadephia feels worse than Eagles wide receiver Alshon Jeffery. With his team down six late in the fourth quarter of Sunday’s playoff game against the Saints, Jeffery dropped this would-be first down from Nick Foles at about the New Orleans’ 20-yard line.

The ball ultimately landed in the hands of Saints defensive back Marshon Lattimore — ending the game in the process.

This is not necessarily going to be a career-defining moment for Jeffery. But it’s close.

Following the game, multiple Eagles players went to bat for their brother. It really is something to behold.

It started with Foles himself, who had one message for his wide receiver.

What did Nick Foles tell Alshon Jeffery? First off: I love ya. #eagles pic.twitter.com/tsKc7kWWCY

Malcolm Jenkins also chimed in — indicating that the Eagles would not have won a Super Bowl without Jeffery.

This is very much true. Jeffery caught three touchdown passes in the Eagles’ final two playoff games last season. That included a 34-yard strike from Foles early in the first quarter of the Super Bowl against New England.

Even then, Jeffery seemed to take full responsibility for the drop.

#Eagles WR Alshon Jeffrey could not have been classier. Answered questions for a long time from one scrum, sat in his locker and waited for a few stragglers and then stood up for another round of cameras: “I’ll take this loss on me. But it won’t destroy me.”