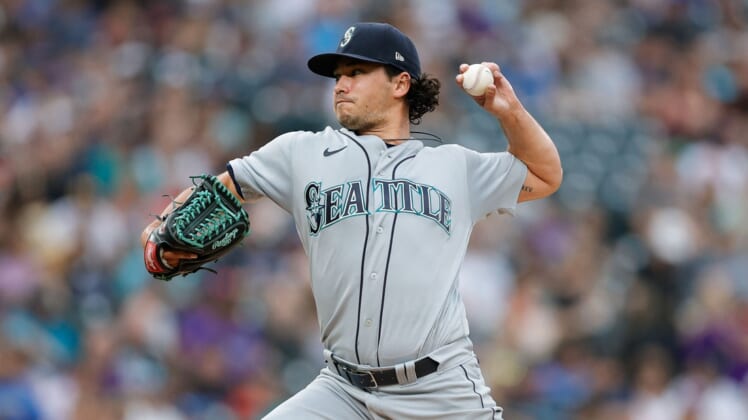 Marco Gonzales pitched five innings of two-run ball to earn his first win since April 15. Kendall Graveman tossed a scoreless ninth inning to pick up his ninth save.

Gonzales (2-5) kept the Rockies off the board for the first four innings, but they finally broke through in the fifth.

Joshua Fuentes led off with a walk and moved to second on a sacrifice bunt by German Marquez. After Hampson popped out in foul territory, Joe hit the next pitch over the fence in dead center to give Colorado a 2-0 lead.

Seattle came back in the sixth to take the lead against Marquez (8-7). Mitch Haniger led off with a single but was thrown out by Joe from left field while trying to stretch it to a double.

Seager followed with a double and moved to third on a single by France. Raleigh doubled to right to drive in both and tie the game.

After a groundout, Moore homered to left to put Seattle in front 4-2.

Marquez allowed four runs on seven hits and two walks while striking out five in six innings. He took his first home loss since May 4, when he gave up eight runs to the San Francisco Giants in two-thirds of an inning.

The Mariners padded their lead off reliever Tyler Kinley in the seventh. Pinch hitter Luis Torrens and J.P. Crawford opened the inning with singles. Two outs later, France drove them both in with a double to left-center to make it 6-2.

Colorado closed the gap in the eighth against Paul Sewald. Blackmon led off with a triple and Cron homered to left, his 14th, to cut the deficit to two runs.