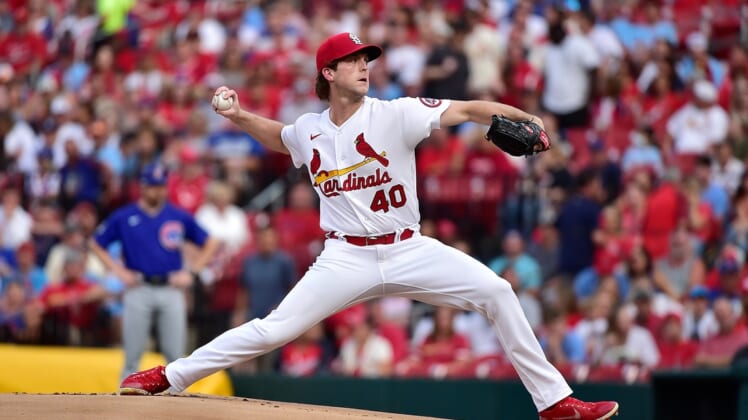 Dylan Carlson homered and drove in four runs as the St. Louis Cardinals opened a four-game series against the visiting Chicago Cubs with an 8-3 victory on Monday.

Paul Goldschmidt followed Carlson’s two-run homer in the sixth inning with a solo blast for the Cardinals, who won their third in a row while capitalizing on four Chicago errors.

Jake Woodford (2-1) allowed one run on six hits with no walks over 5 2/3 innings in his first start of the season. The right-hander matched a career high with six strikeouts.

Patrick Wisdom had three hits and belted a solo homer for Chicago, which has lost 21 of its last 29 games.

Carlson delivered an RBI single in the third inning before St. Louis sent 10 batters to the plate and scored four runs during an error-filled fourth inning.

Chicago committed three errors in the frame, including back-to-back miscues by shortstop Javier Baez. The second one came on an errant throw home with the bases loaded, allowing Yadier Molina to score easily from third.

Cubs starter Alec Mills (4-3) gave up five runs (one earned) on five hits over four innings. He struck out six with two walks.

Chicago loaded the bases with no outs in the fifth but pushed just one run across after pinch-hitter Ian Happ grounded into a double play and Willson Contreras flied out to end the inning.

St. Louis extended its lead with three runs in the sixth against Keegan Thompson. Carlson delivered a two-run shot to right field for his first homer since June 25.

Goldschmidt followed with a solo homer to center, his fourth homer in his last five games.

Anthony Rizzo and Rafael Ortega had two hits apiece for Chicago. Rizzo doubled to lead off the eighth inning and scored on Kris Bryant’s groundout.

Third baseman Nolan Arenado received a scheduled day off for the Cardinals, who moved back to .500 at 47-47.