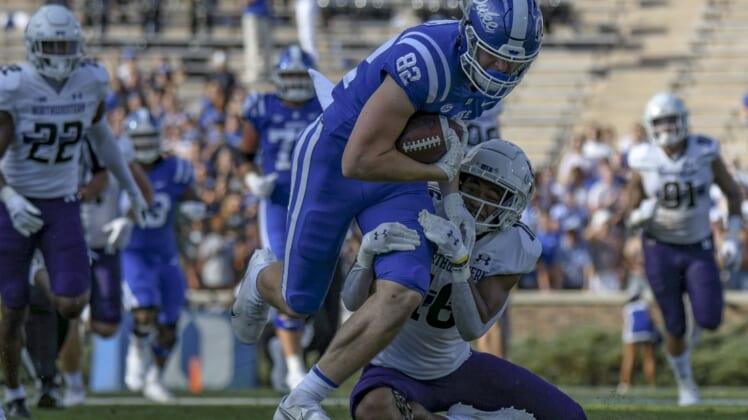 The Duke Blue Devils scored 27 consecutive points to start the game and held off a second-half comeback from the Northwestern Wildcats to win 30-23 in Durham, N.C., on Saturday night.

Gunnar Holmberg threw for 314 yards and one touchdown, and Mataeo Durant added 102 yards on the ground and a touchdown for the Blue Devils (2-1), who racked up 420 of their 558 yards in the first half and did not score in the second half.

The Wildcats (1-2) used three quarterbacks in the game. Starter Hunter Johnson was pulled late in the first half after throwing three interceptions and fumbling in the red zone.

Andrew Marty replaced him and led three straight touchdown drives but was injured in the fourth quarter and was ruled out for the rest of the game. South Carolina transfer Ryan Hilinski led the final two drives of the game: a 3-and-out and a field goal.

After forcing a 3-and-out on the first possession of the game, Duke needed only 51 seconds to go 60 yards and score its first touchdown – an 11-yard pass from Holmberg to Durant.

Durant scored two minutes later on a 21-yard rush as the Blue Devils traveled 70 yards on only five plays. Jordan Moore added a 9-yard rush at the end of the quarter to give Duke a 21-0 lead at the end of 15 minutes.

Duke’s Charlie Ham hit three field goals in the second quarter, including a 50-yard field goal with one second remaining.

Marty’s first possession was Northwestern’s last of the first half, and he led the Wildcats down the field. He threw a 31-yard pass to Jacob Gill to cap a six-play, 51-second, 75-yard drive to trail 27-7.

Marty hit Marshall Lang for a touchdown on the first Northwestern drive of the second half but failed to convert the two-point attempt. Marty then scored on a 1-yard rush about 80 seconds later to cut the deficit to 30-20 with 10:21 left in the third quarter.

The Wildcats slowed down, though, and Marty was hurt after fumbling early in the fourth quarter.

Charlie Kuhbander added a 25-yard field goal to cut Northwestern’s deficit to seven with 2:48 remaining, but the Wildcats never got the ball back.