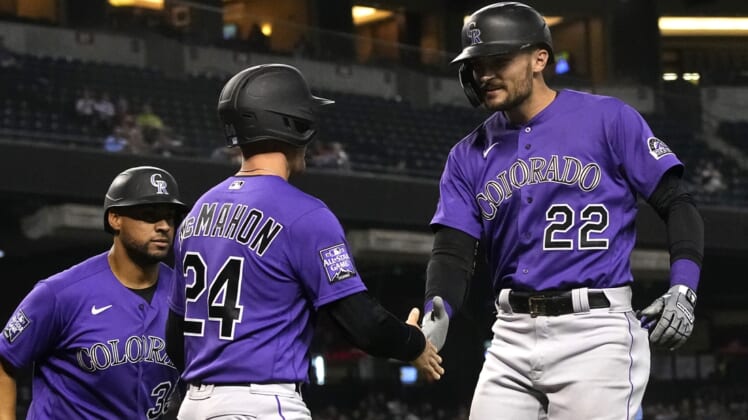 Dom Nunez hit a tying homer in the ninth inning and Trevor Story delivered the tiebreaking single later in the inning as the Colorado Rockies recovered from a seven-run deficit to post a 9-7 win over the Arizona Diamondbacks on Friday night at Phoenix.

Sam Hillard hit a three-run homer and Brendan Rodgers had three hits for the Rockies (74-85).

Rookie pitcher Humberto Castellanos hit a three-run homer for his first major league blast for the Diamondbacks (50-110), who lost their fifth straight game. Arizona stands one setback shy of the franchise record for losses (111 in 2004).

Christian Walker added a two-run homer and Ketel Marte slugged a solo shot for the Diamondbacks.

Colorado was three outs away from losing before Nunez hit the eighth pitch of an at-bat over the wall in right against left-hander Caleb Smith to knot the score at 7-7. The homer was Nunez’s ninth of the season.

One out later, right-hander J.B. Wendelken (3-3) entered and allowed a double to Rodgers and walked Charlie Blackmon before Story punched the go-ahead single into right center. C.J. Cron followed with an infield grounder to score Blackmon.

Lucas Gilbreath (3-2) struck out three in a scoreless eighth, and fellow right-hander Carlos Esteves struck out two in a perfect ninth for his 11th save.

Castellanos gave up six runs and nine hits over 5 2/3 innings. He struck out four and walked one.

Rockies right-hander Jon Gray served up three homers while allowing seven runs and seven hits over four innings. He struck out seven and didn’t walk anyone.

Castellanos sparked a seven-run third inning when he deposited Gray’s first-pitch slider over the fence in left for a three-run homer.

One out later, Marte lined his 14th homer of the season, a shot to right. Daulton Varsho followed with a single to left and David Peralta sliced a two-out double into the left-field corner to make it 5-0.

Walker capped the big frame with a shot that barely cleared the wall in right. The homer was Walker’s 10th of the season.

Colorado began its rally with a six-run deluge in the sixth.

Cron’s one-out single to center plated the first run, and Ryan McMahon followed with a run-scoring double just inside the left-field line. Elias Diaz hit an RBI single to left to pull the Rockies within 7-3.

Hilliard followed with his three-run blast to left to make it a one-run game. It was his 13th homer of the season.