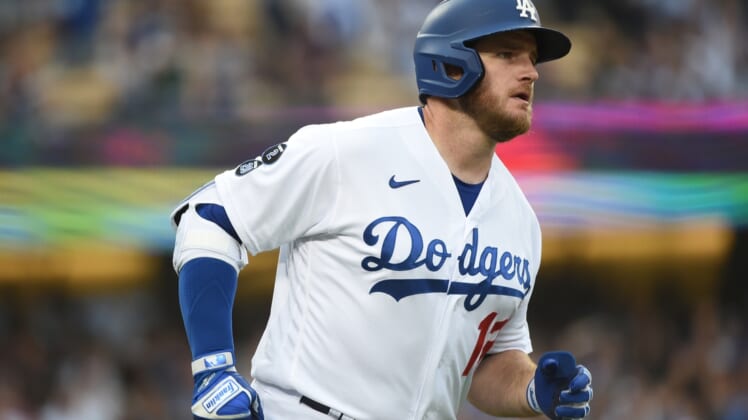 Mookie Betts and Max Muncy hit home runs as the first two Los Angeles batters of the game and the Dodgers held on for a 3-2 victory Monday over the visiting San Francisco Giants in the battle of the two best teams in the National League.

Will Smith added a home run for Los Angeles, while right-hander Trevor Bauer (8-5) gave up two runs on eight hits over six innings with one walk and eight strikeouts. The Dodgers extended their winning streak to four games.

LaMonte Wade Jr. and Brandon Crawford hit home runs for the Giants, while Wilmer Flores had four hits, as San Francisco lost consecutive games for the first time since a May 21-23 sweep by the Dodgers. The Giants went 0-for-13 with runners in scoring position.

Giants starter Anthony DeSclafani (8-3) gave up three runs on five hits over five innings with two walks and six strikeouts. DeSclafani saw his four-game win streak come to an end, with his last loss coming May 23 against the Dodgers.

The Giants entered with a major league best 50-27 record, while the Dodgers were second-best in the NL at 47-31.

Betts hit DeSclafani’s third pitch over the wall in center field, while Muncy followed four pitches later with a drive toward the seats in right. It was Betts’ 10th of the season while Muncy hit his 16th.

Wade got one of the runs back in the third inning on a home run just over the wall in right field, his sixth of the season.

Smith hit his 10th in the fourth inning to give the Dodgers a 3-1 advantage, before Crawford made it 3-2 in the sixth on a deep home run to center field. Crawford’s 444-foot blast, his 17th, was his longest in the Statcast era.

Dodgers relievers Victor Gonzalez, Blake Treinen and Kenley Jansen closed out the victory, with Jansen earning his 19th save.

The Giants’ Mike Yastrzemski left the game in the seventh inning after fouling a ball off his right leg. He finished his at-bat by grounding out, before not returning to right field in the bottom of the inning.