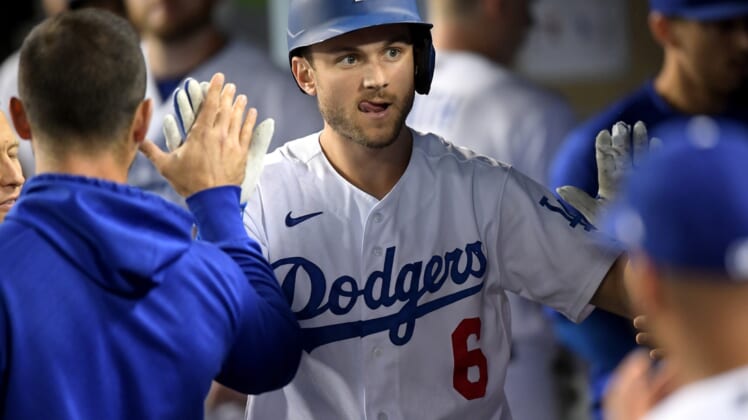 Max Muncy, Trea Turner and Will Smith homered Tuesday as the Los Angeles Dodgers clinched a playoff berth for the ninth consecutive season with an 8-4 victory Tuesday over the visiting Arizona Diamondbacks.

The playoff clincher for the second-place Dodgers came one day after the National League West-leading San Francisco Giants became the first major league team to clinch a spot in the 2021 postseason.

Tony Gonsolin (3-1) pitched five shutout innings in his second start off the injured list as the Dodgers won their fifth consecutive game but remained 2 1/2 games behind the Giants, who are on a nine-game winning streak.

The Dodgers (93-53) earned their 13th victory over the Diamondbacks in 15 meetings this year and improved to 8-1 at home against their division rival.

Ketel Marte had a three-run homer among his three hits for Arizona (47-98), which lost for the 13th time in its last 16 games. Marte, a former infielder, was making his first start at second base this season.

The Diamondbacks lost rookie first baseman Seth Beer in the first inning with a dislocated left shoulder. He was hurt on a diving attempt to stop an RBI double down the line by Trea Turner.

The Dodgers built on that early 1-0 lead with a two-run home run from Muncy in the third inning, his 33rd. Corey Seager added another run in the third for a 4-0 lead, scoring on a throwing error by Arizona pitcher Luke Weaver.

Trea Turner added a homer in the fifth inning for a 5-0 lead, his 22nd on the season and his fourth since joining the Dodgers at the trade deadline from the Washington Nationals.

The Diamondbacks broke through in the sixth inning on a David Peralta RBI double, but Will Smith got the run back for the Dodgers with a homer in the bottom of the inning, his 24th.

Marte’s home run, his 12th, cut the Dodgers’ lead to 6-4 in the seventh, but Los Angeles got two of the runs back in the inning on sacrifice flies from Justin Turner and Smith.

Weaver (3-5) gave up four runs (three earned) on five hits over four innings with one walk and four strikeouts.