WATCH: Doc Rivers tosses James Harden on loss grenade, is there trouble ahead for 76ers?

On Thursday night, James Harden got a very public taste of the brutally honest hot takes of his current coach Doc Rivers.

Following Harden’s trade from the Brooklyn Nets to the Philadelphia 76ers, the superstar combo of Joel Embiid and James Harden got off to a pretty fast start. The pair had chemistry instantly and their potential to devastate opponents heading into the playoffs seemed near limitless. However, since those early days in February, the team has sputtered a bit.

On Thursday night, the growing pains hit a new low point when they fell to the hapless Detriot Pistons 102-94 at home. The setback was a third straight and Harden did not have an impressive showing. While he had a near triple-double with 18 points, nine rebounds, and seven assists, he was four of 15 from the floor in 38 minutes.

Coach Rivers was asked by a media member if the source of the team’s low points total had to do with the play of the bench. Which only totaled eight points on the night. However, the former Boston Celtics and Los Angeles Clippers coach actually shrugged the notion off and put the onus for the scoring issues during a key part of the game on his newest superstar instead.

“Well, [the bench] didn’t struggle. They didn’t get a lot of shots, in their defense. I think during that stretch it was more James than them,” said Rivers. “Yea, it’s just a tough night.”

It was a surprising comment in a league where All-Star talents are coddled and protected. However, Rivers is an old-school coach who is more willing to hold his top stars accountable. It has been a pro for him, and recently a con, as the league continues its never-ending evolution.

Is there trouble ahead for the Philadelphia 76ers?

Could the recent play from the 76ers be a sign of more problems ahead? Yes and no. When adding an elite talent to a team, especially won that does as much ball-handling as Harden, there is an expectation of growing pains. The combo of Harden and Embiid did not have a training camp to work out the kinks in their chemistry. Instead, the team has to learn to mesh with Harden’s style during the season, for the world to see.

Considering the talent involved, and the top-level coach leading the way, the 76ers will eventually come together and be a legitimate force in the Eastern Conference in the playoffs. However, when Harden has scored less than 20 points for Philadelphia, the team has lost in the majority of those games. Meaning, that when he isn’t on the other ‘6ers — outside of MVP candidate Embiid — are not filling the offensive void.

If that trend continues, and teams decide to key in on Harden and let Embiid get his points, the team’s run in the playoffs could be shorter than experts and fans expect. 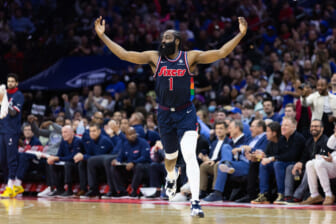 The 76ers return to the NBA games today schedule on Saturday to face the Charlotte Hornets.