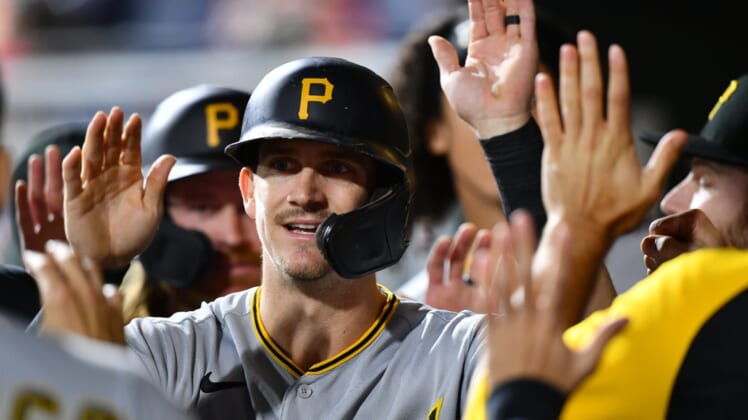 Didi Gregorius homered, singled and drove in three runs to lift the host Philadelphia Phillies past the Pittsburgh Pirates 8-6 on Friday as the Phillies continued to gain ground in the National League East.

Phillies starter Kyle Gibson and Brad Miller each added homers as the Phillies (80-74) won their fourth in a row and eighth in their past 10.

The Phillies began the night two games behind the Atlanta Braves for first place in the National League East.

Hector Neris (4-6) earned the win in relief and Ian Kennedy pitched a scoreless ninth inning for his 26th save despite allowing two baserunners.

The Pirates (57-96) sent Sam Howard to start and he lasted just one inning in a bullpen game.

In the bottom of the third, Gibson ripped a solo homer to left field for a 1-0 lead. It was Gibson’s first major league home run and second run batted in.

The Pirates were held without a hit through the first three innings before Reynolds opened the fourth with a single. Colin Moran followed with a walk and Ben Gamel was hit by a pitch to load the bases. Newman then hit a two-run double for a 2-1 advantage. Perez added a two-run single for a 4-1 lead.

Miller lined a solo homer in the fourth, his 20th of the season, to close the Phillies within 4-2.

Bryce Harper hit an RBI double with two outs in the fifth to cut the deficit to 4-3.

Nick Mears threw a wild pitch and Andrew McCutchen scored to tie the game at 4 in the sixth. Pinch hitter Ronald Torreyes then responded with an RBI single for a 5-4 Phillies lead.

Hoy Park singled with one out in the seventh and Difo crushed a two-run, pinch-hit homer off Cam Bedrosian as the Pirates regained a 6-5 lead.

In the bottom of the inning, Gregorius hit a three-run homer with two outs and the Phillies moved back ahead 8-6.

Ke’Bryan Hayes grounded out with the bases loaded to end the eighth off Neris, who threw 41 pitches in recording five outs.