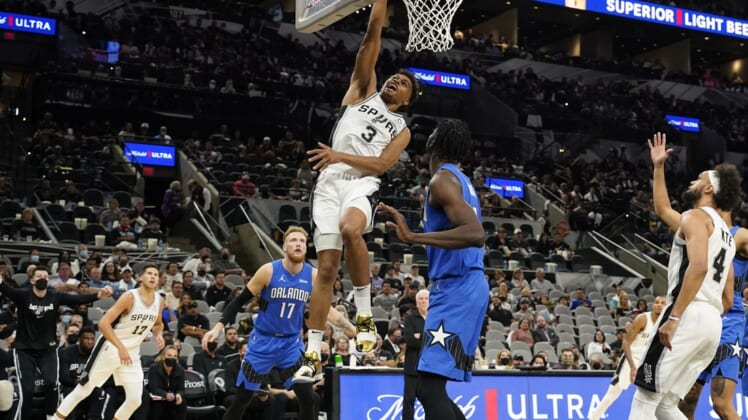 Devin Vassell poured in 19 points off the bench, including eight during a third-quarter spurt that cemented the game, as the San Antonio Spurs rolled to a 123-97 win over the visiting Orlando Magic on Wednesday in the season-opener for both teams.

The Spurs roared to a big lead midway late in the second quarter and Orlando never got closer than eight points over the final 17 minutes thanks to balanced scoring and a swarming defense that forced the Magic into 16 turnovers.

Lonnie Walker IV added 17 points, also off the bench, with Derrick White hitting for 16, Keldon Johnson and Dejounte Murray scoring 15 points each, and Doug McDermott and Jakob Poeltl contributing 12 apiece for the Spurs. Poeltl also led all players with 13 rebounds.

The Magic led for the majority of the first quarter before San Antonio ended the period on an 11-0 run to go up 32-28 after 12 minutes of play. The Spurs expanded their lead to as many as 15 in the second quarter before settling for a 61-49 advantage at the break.

Johnson racked up 13 points in the first half to lead all scorers, with Murray recording 11 and McDermott adding 10 for San Antonio. Orlando was paced by nine points each from Bamba and Anthony, but the visitors shot just 39.5 percent in the half.

The Magic cut their deficit to 74-66 at the 4:21 mark of the third period, but San Antonio again found its best stride late in the quarter, reeling off a 20-5 run keyed by eight points from Vassell to take a 94-71 lead into the final period.

Orlando played without Markelle Fultz, Jonathan Isaac and Michael Carter-Williams, all of whom are recovering from injuries from either last season or the preseason.