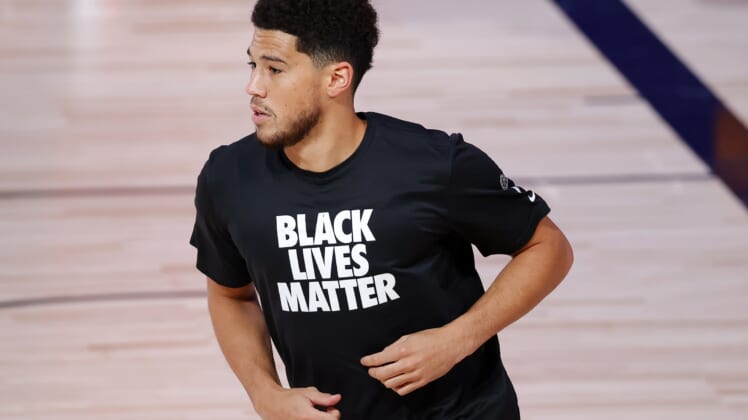 The Phoenix Suns are now 4-0 inside the Walt Disney World bubble and remain the only undefeated team since the NBA season resumed.

A year that has been unpredictable could potentially culminate in Phoenix earning the final playoff spot in the Western Conference and taking on the Los Angeles Lakers in the first round. Think about that for a second.

Following the Suns’ latest win, 114-99 blowout over the Indiana Pacers on Thursday, star guard Devin Booker was seen wearing a Lakers shirt. He also paid homage to the late-great Kobe Bryant in his post-game presser.

It was less than eight months ago that Kobe left us following a tragic helicopter that claimed the legendary Lakers player. While it seems like eons ago, Mr. Bryant remains on the minds of those around the NBA. Most youngsters around the Association grew up idolizing Bryant. That obviously includes the 23-year-old Booker.

Doing his best Bryant impersonation earlier this week, Booker put up a dagger game-winning shot against the Los Angeles Clippers. It reminded onlookers of Kobe in his heyday.

Just a couple weeks from what would have been Bryant’s 42nd birthday, the NBA Playoffs will be starting at about the same time. It would be great to see Booker and his Suns go up against the only team Kobe suited up for during a legendary two-decade career in the NBA.