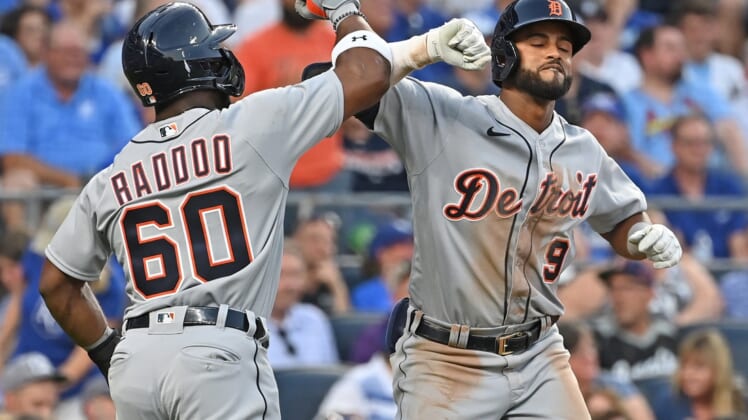 Miguel Cabrera had three hits, two RBIs and two runs scored, including one of each in a four-run first, as the Detroit Tigers defeated the Royals 10-3 Monday night in the first game of a three-game series in Kansas City.

The Tigers snapped their three-game losing streak, while the Royals saw their losing streak stretch to four games and are a season-worst five games below .500. The Royals have not led since the final out of Thursday’s 6-1 victory in Oakland.

The Royals were 1-for-14 with runners in scoring position.

The Tigers lost two pitchers to injury. Detroit starter Matthew Boyd left the game in the third inning with left-arm discomfort. Alex Lange left with right-shoulder discomfort in in the fifth after 1/3 of an inning.

Brad Keller (6-6) took the loss. He gave up seven runs, six earned, in five innings. His first-inning woes continued, giving up four runs (three earned) on four hits in the first. His first-inning ERA is now 9.64.

He hit Robbie Grossman leading off and then gave up a single to Harold Castro. Jonathan Schoop hit a ground ball through the legs of third baseman Kelvin Gutierrez. Miguel Cabrera singled to center driving in another run and Niko Goodrum drove in two with a single.

Boyd was hardly cruising when his night came to an end. He gave up five hits through 2 1/3 innings, but he escaped without allowing any runs.

Keller got into more trouble in the fourth. He gave up an infield hit before Willi Castro hit a two-run home run to right.

The Royals finally scored in the fourth on a two-out double by Hanser Alberto, scoring Edward Olivares.

The Tigers answered that run on a sacrifice fly by Nomar Mazara in the fifth, driving in Cabrera.

The Royals got runs in the fifth and sixth innings, but left the bases loaded in both innings.

The Tigers scored in the eighth on a solo home run by Goodrum and in the ninth on a homer by Grossman and a single by Cabrera that scored Schoop, who had doubled.