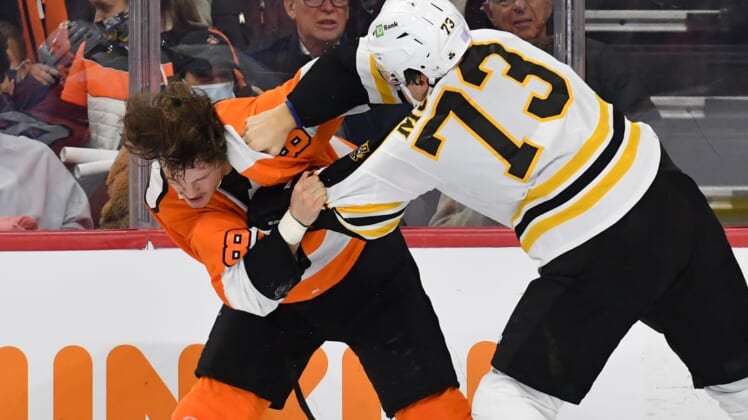 Craig Smith and David Pastrnak each added one goal and one assist for the Bruins, who won their third in a row. In a bizarre scheduling quirk, it was the Bruins’ first game since last Sunday.

Flyers goaltender Martin Jones was peppered with 44 shots and made 39 saves.

The Bruins were dominant in the first period and drew a two-man advantage at 12:07. Despite not scoring on the power play, they led 21-8 in shots and went ahead 1-0 when Nosek scored at 18:25.

Nosek transferred the puck from his skate to his stick and scored on the backhand.

Boston took a 2-0 lead 30 seconds into the second period when Forbort fired a shot from the point, which deflected off Justin Braun and past Jones into the net.

The Flyers were soon awarded their third power play and they finally capitalized with Brassard’s second goal at 9:25. They were four for their last 40 on the power play coming into this game.

The Bruins started strong in the third and took a 4-2 advantage when Smith ripped a shot past Jones on the short side at 1:28.

Braun fired a wrist shot that was blocked and cleared by Ullmark at 8:55.

Pastrnak scored at 12:07 and the Bruins moved out to a commanding three-goal lead.

The Flyers opted not to pull Jones for an extra skater in the final few minutes.