Dejounte Murray scored 26 points to lead a balanced San Antonio attack as the Spurs jumped on top early and rolled to a 136-117 win over the visiting Sacramento Kings on Wednesday.

Drew Eubanks hit for 18 and Doug McDermott added 17 points for the Spurs, but it was San Antonio’s bench that was the difference. Four of the Spurs’ reserves — Thaddeus Young (17 points) and Devin Vassell, Lonnie Walker IV and Bryn Forbes (15 each) combined for 62 of San Antonio’s 65 points from non-starters.

Keldon Johnson pulled down 13 rebounds for the Spurs.

De’Aaron Fox poured in a game-high 37 points — 24 of those in the second half — to lead the Kings. Davion Mitchell and Chimezie Metu added 13 points apiece, Buddy Hield scored 12 and Richaun Holmes grabbed 12 rebounds for Sacramento, which lost for the third straight game.

The Spurs were super sharp in the first quarter and Sacramento was not. San Antonio scored the game’s first seven points, led by 10 midway through the period and by 19 points after a 3-pointer by Vassell at the 3:38 mark. The Spurs were up 34-20 after 12 minutes of play.

San Antonio matched their largest advantage at 71-49 after a free throw by Walker with 54.5 seconds left in the half. A late Sacramento run brought the Kings within 71-54 heading to the locker room. 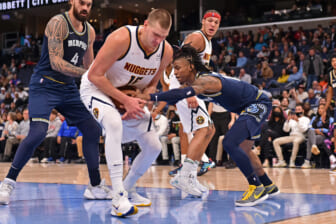 Murray paced all scorers with 14 points in the half as San Antonio outshot the Kings 55.1 percent to 44.4 percent over the first 24 minutes. Walker had 11 and Forbes added 10 for the Spurs in the half. Fox led the Kings with 13 points.

The Kings played without Tyrese Haliburton (back injury) for the second straight game while San Antonio was missing Jakob Poeltl (health and safety protocols).